Waiting on Wednesday: The Land of Stories by Chris Colfer 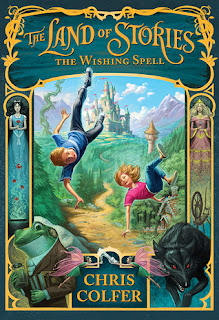 Alex and Conner Bailey's world is about to change, in this fast-paced adventure that uniquely combines our modern day world with the enchanting realm of classic fairytales.

The Land of Stories tells the tale of twins Alex and Conner. Through the mysterious powers of a cherished book of stories, they leave their world behind and find themselves in a foreign land full of wonder and magic where they come face-to-face with the fairy tale characters they grew up reading about.


So I'll be the first to admit that I'm a Chris Colfer fan. Not necessarily Glee (I used to be, but 3 seasons and we're STILL on the Finchel thing? Please.), but Chris Colfer. I find him to be awe-worthy. His voice, his acting, how he can carry the barest of emotions with just a flick of his eyes. Beyond that though, I do think he's got a lot to offer as an artist and writer. Have you seen the trailer to his movie Struck By Lightning (if not, watch it here!)? He wrote, starred in, and helped produce it, and I have to say that it looks quite promising!

Even if this didn't have a celebrity's name attached as the author though, I'd be interested! It reminds me a lot of Storybound by Marissa Burt (the premise, anyway - I'm only halfway through Storybound) - which I love. It just sounds like a fun, solid adventurous Middle Grade novel. I'm hoping to snag an ARC at ALA if they'll have them there; regardless how I acquire it, I know I will some day soon.

What book are you waiting for?
Leave your link in the comments and I'll hop by!
Posted by Ashley @ Ashley Loves Books at 10:30 PM