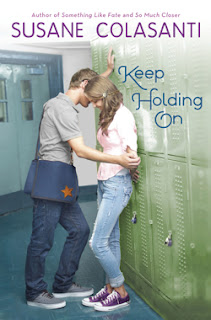 Keep Holding On by Susane Colasanti
Penguin Teen, 290 Pages
Expected US release date: May 31, 2012 (I think...NG still says June 14. And I've already seen it out at my BN!)
Format: e-ARC
Source: Penguin Teen, via NetGalley (thank you!)


Noelle's life is all about survival. Even her best friend doesn't know how much she gets bullied, or the ways her mom neglects her. Noelle's kept so much about her life a secret for so long that when her longtime crush Julian Porter starts paying attention to her, she's terrified. Surely it's safer to stay hidden than to risk the pain of a broken heart. But when the antagonism of her classmates takes a dramatic turn, Noelle realizes it's time to stand up for herself--and for the love that keeps her holding on.
------------------Goodreads summary

Notable Quote
School would be way more tolerable if everyone wasn't so afraid to be who they really are. And if everyone else would let them.

I just want to hug everyone in this book, you guys. All of them. Even the bullies (sometimes...maybe just a pat on the back). I want to take them all home with me and feed them and read them stories and reassure them that life gets better.

My heart is so broken over the idea that this book isn't just a story to someone - it's THEIR story. This is their reality. And I hate that so much. I couldn't help it but feel that some of this could be an extreme version - but then it makes me feel guilty that it's "extreme" to me because I was so, so fortunate to never go through this. It's absolutely shattering to know that someone is probably relating to this, going through the exact same thing.

The secondary characters were the best. I mean, I liked Noelle, the main character: she was a solid teenage girl, going through the paces and making my heart contract when she didn't fight back. She grew and evolved really well. But all those around her were amazing. Sherae was the best friend we all want, I'm so in love with Simon (lit mag editor?! Yes PLEASE!), and I want to marry Julian. I want someone to say "I'd do anything for you, don't you know that?" to me. That line literally made my heart skip. Ms. Scofield was quirky and jumped right off the page for me, recalling several favourite teachers from my past. And even though I just wanted to shake Noelle's mom until she came to her senses, I thought she was done well, too.

I really liked that Susane Colasanti gave lovable characters in this. That she gave Noelle lifelines, that they were true friends to her throughout her ordeal. I liked that Noelle was the block for most of the novel, not being able to get over her own humiliation and embarrassment to reach out to those there for her. The story itself is woven really well. Bullying is often about the internal and the external, how those around you can affect what's inside you, and I think Susane told this brilliantly.

Keep Holding On is also very well rounded and reasoned. I'm not sure I'm saying that correctly - what I mean is that it's inevitable for you to start questioning things when you're reading. Why doesn't Noelle tell Julian? Why doesn't she dump Matt? Why doesn't Sherae tell? Why does Carly suck so hard? Why would Audrey do what she does? What is wrong with Noelle's mom? The book answers every single one of those. For everything that happens, there's an explanation that goes with it - and I really love that. It makes the novel real, and full, and sweeps me right along into the drama and emotion of it since I feel like I really understand everything.

There's more I want to talk about, but it would spoil some of the book - if you've read it, let me know! We'll chat on Twitter or something :)

So, there's really not much much else to say about this book, except that it's an important one. I want to pass it out to every high schooler in the world. I encourage everyone to read it, and share it with others, and to talk to each other.

PS. Her reference to The Outsiders was all sorts of win.

PPS. My dream cast of Keep Holding On.