Waiting on Wednesday: Meant To Be by Lauren Morrill 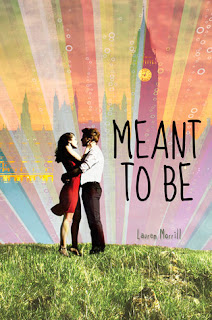 Meant To Be by Lauren Morrill
Delacorte, 290 Pages
Expected US Release Date: November 13, 2012

It's one thing to fall head over heels into a puddle of hazelnut coffee, and quite another to fall for the—gasp—wrong guy. Straight-A junior Julia may be accident prone, but she's queen of following rules and being prepared. That's why she keeps a pencil sharpener in her purse and a pocket Shakespeare in her, well, pocket. And that's also why she's chosen Mark Bixford, her childhood crush, as her MTB ("meant to be").

But this spring break, Julia's rules are about to get defenestrated (SAT word: to be thrown from a window) when she's partnered with her personal nemesis, class-clown Jason, on a school trip to London. After one wild party, Julia starts receiving romantic texts . . . from an unknown number! Jason promises to help discover the identity of her mysterious new suitor if she agrees to break a few rules along the way. And thus begins a wild goose chase through London, leading Julia closer and closer to the biggest surprise of all: true love.


How. Freakin'. CUTE DOES THIS BOOK LOOK?! I mean, it's in London, and there's obvious reference to Shakespeare, and romantic texts, and omg omg I want it FOREVER. It is on NetGalley, but I'm still waiting on a response...quick prayer to the Book Gods for me to get it!

What book are you waiting on?
Leave your link in the comments and I'll hop by!
Posted by Ashley @ Ashley Loves Books at 10:30 PM