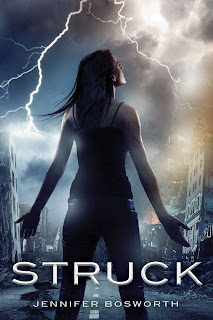 Mia Price is a lightning addict. She's survived countless strikes, but her craving to connect to the energy in storms endangers her life and the lives of those around her.

Los Angeles, where lightning rarely strikes, is one of the few places Mia feels safe from her addiction. But when an earthquake devastates the city, her haven is transformed into a minefield of chaos and danger. The beaches become massive tent cities. Downtown is a crumbling wasteland, where a traveling party moves to a different empty building each night, the revelers drawn to the destruction by a force they cannot deny. Two warring cults rise to power, and both see Mia as the key to their opposing doomsday prophecies. They believe she has a connection to the freak electrical storm that caused the quake, and to the far more devastating storm that is yet to come.

Mia wants to trust the enigmatic and alluring Jeremy when he promises to protect her, but she fears he isn't who he claims to be. In the end, the passion and power that brought them together could be their downfall. When the final disaster strikes, Mia must risk unleashing the full horror of her strength to save the people she loves, or lose everything.
-----------------------------------Goodreads summary

Notable Quote
This whole city is dangerous. The whole world is dangerous. You know what's really dangerous? Standing next to you, Mia, but I've done that my whole life, haven't I? I've always stood by you...even when a storm was coming.

Struck is unlike any other book I've ever read - which doesn't mean too much since I've read like 1% of all books ever, but still! It's action-packed, adventurous and tense all at once. It seemed quite clear to me that the author is also a screenwriter, as I felt the pacing of the novel was done really well. Normally that isn't something I pay attention to, but I felt like it was a very smooth ride through a sticky, potentially complex mix of people and groups.

Focusing on Mia Price, a girl who has a past of being struck my lightning and seems to feed off it, Struck tells the tale of 3 days. But not just any 3 days: it's been a little over a month since a devastating earthquake in Los Angeles that's destroyed and displaced most of the residents, and a Prophet has been speaking that another, even more destructive storm will come in 3 days.  It's almost a pre-Apocolyptic novel, except it's like...Apocolypse-is-coming-tomorrow-get-your-shit-together.

Obviously, knowing the storm is coming in 3 days creates incredibly tense situations, and my fear was right up there with Mia. I wanted her to protect her family, I wanted her to figure out what her role was in the entire story, everything was done with bated breathe. Jennifer Bosworth plays the reader well, bringing you high and low and increasing tension and quelling it just so.

I don't know what I was expecting exactly, but I had no idea just how much this book is about Cults. I've a weird relationship with Cults, in that I just don't know how I feel about them. They're cast in such a bad light, but then it's such a subjective thing about what's a cult and what isn't...I mean, I was at the library once and this woman would not stop calling Mormonism a Cult. And while I don't agree with that, she's not the first I know to believe it is. So when this book started showing the Prophet's Followers as believing they spoke the Word of God, and then the opposition of the Seekers who believed in the Spark...it kind of made me squirm. Just because I felt like it could be at touch political and religious, two topics that are incredibly difficult to tread.

That said, Jennifer Bosworth handled them pretty well. The concept of them and how they related and needed Mia in this inevitable End of the World was creative, and I really loved how it was obviously a Good vs. Evil battle -- but you couldn't be sure which side was what. I actually felt pretty conflicted as to who to believe; enough where I was kept guessing to the end.

One of the problems I had though was the general tone...there were a few times where I thought Mia's dry humor or sarcasm was ill-placed, as well as a few times where I thought the writing and thoughts were a bit cheesy and could use a good comic relief sentence. Don't get me wrong, most of the time I liked the little bits of humor - they were an unexpected laugh -- but sometimes it just felt inappropriate. It also seemed a few ideas or thoughts could be inferred, but the author decided to spell it out. Maybe there was a reason for it, maybe I'm just being nit-picky...but there were definitely times I got distracted and enough for me to notice.

I'm also unsure how I felt about the romance aspect. I don't want to spoil it for anybody, so I won't get into the details. I'll admit that it killed me the first times because the boy's name + description is an EXACT replica to the last boy I had a small heartbreak over, so it's still a bit of a tender issue. I honestly had to start switching the name in my head because it was bringing up a lot of feelings I thought were buried; which made me wonder if that was influencing how I felt about the romance. It felt like a story I'd read before, and truthfully, I never questioned how it would end up. Even when the plot seemed to change or felt like it made the relationship uncertain, I always knew how it would end. That part was predictable.

Despite a disappointing romance and distracting lines, Struck is a BOOMING, phenomenal debut novel, filled with CRACKLING tension and STRIKING action that deserves THUNDEROUS applause. (Ya like that? I had to do it.)  I hope you pick it up, because you'll get swept away, too.

PS. Is Struck a series? Or a stand alone? It could stand alone, but I definitely think there's room (and the set up) for a second one...I'd be interested to find out the futures of the characters!