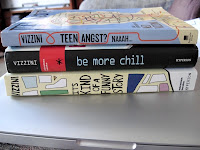 And my author signing blitz continues! This past Sunday was Ned Vizzini, the author of Teen Angst...Naaah, Be More Chill, It's Kind of A Funny Story, and the forthcoming The Other Normals (SO excited!). He was the headlining author at the La Mesa Children's Book Festival here in San Diego - I missed Ned at the LATFOB, so I was even more determined to see him. Even though I haven't mentioned his books too much (though his cover often makes an appearance!) since I read him before I had a blog, I absolutely LOVE his books. I really connected with It's Kind of A Funny Story, because I've felt incredibly similar to Craig. 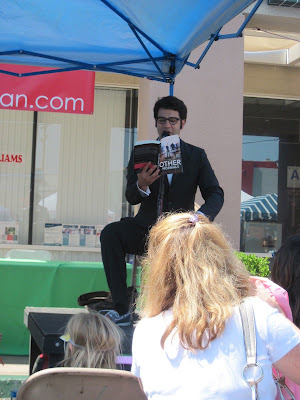 (Did anyone know he writes for that Teen Wolf show on MTV? I had no idea!)

Anyway. La Mesa isn't really that close to where I live (~35 minute drive), and the day was blisteringly hot (87*-ish), and I'm fairly certain I have sunburned lips now which is like the most painful sunburn ever, but all of it was SO worth it. Ned Vizzini is funny and personable and friendly and has a good sense of humor. (and cute! love his glasses. *blush*) The announcer guy at the festival did not hide that he had no idea who Ned was and couldn't find his notes to introduce him for a few seconds, so it was awkwardly silent and the guy started making jokes...Ned did very well just rolling with it.

It was a pretty quick thing since there weren't many people at the Festival as a whole, but it was still really, really good - the audience asked some quality questions, I was thoroughly impressed! Ned started by reading the opening pages to The Other Normals, then took questions.


And I laughed because I totally took a wide picture to include his shoes because they were so cool, and later he made a joke about asking him about them! Of course someone in the audience did, and they are Sperry Top-Siders. Boat shoes. and AWESOME.
I feel like taking a photo of his shoes makes me creepy, but it's already there. It's done. DON'T JUDGE ME.

After he signed books and of course Ned is awesome and nice. I overheard him talking to a few of the ladies in front of me, and was pleasantly surprised to hear him asking more than the average" how's your day going" things - he had actually noticed who asked which questions and had discussions with them, which was incredibly thoughtful and says a lot about who he is. We chatted about his books, LATFOB, general things. HE LET ME READ SOME OF HIS ARC, YOU GUYS. Seriously, you have no idea how much I want to read this book, so I was freaking out when I'd told him I really liked what he'd read -- and then he told me to read the REAL opening and handed me the ARC. 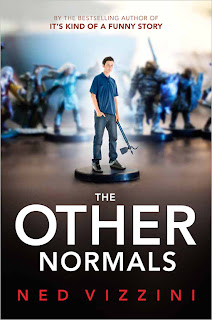 Remember how I mentioned up there he had to self-edit the content because of the children. Well...trust me that he did haha. And if it's possible, I loved him more. So yeah, I was able to hold a real copy of the book, and read real words from it, and read real band lyrics featured in it!

If he's appearing anywhere near you, I highly recommend going to meet him! This was probably one of my favourite author meetings I've ever had - Ned seems so genuine and I really felt like I got a sense of who he was. (Who knows if that's actually what he's like, but it's still nice to feel like it!) He told me that he might be doing something or appearing at ALA, so if you're going, keep an eye out! That's definitely where I'll be.
Posted by Ashley @ Ashley Loves Books at 1:00 PM