Review: The Summer My Life Began by Shannon Greenland (eARC) 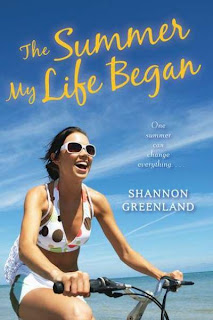 Elizabeth Margaret—better known as Em—has always known what life would contain: an internship at her father’s firm, a degree from Harvard and a career as a lawyer. The only problem is that it’s not what she wants. When she gets the opportunity to get away from it all and spend a month with the aunt she never knew, she jumps at the chance. While there, Em pursues her secret dream of being a chef, and she also learns that her family has kept some significant secrets from her, too. And then there’s Cade, the laid-back local surfer boy who seems to be everything Em isn't. Naturally, she can’t resist him, and as their romance blossoms, Em feels she is living on her own terms for the first time.
----------------------Goodreads summary

Notable Quote
Sooner  or later you're going to  figure out your life is your life. You can't please everybody. Now's the time for you to make a change before you're too far...

This is one of those reviews where I'm going to say some things that are essentially negative, but I don't mean it in a bad way -- which is strange, but true! It's not a bad book at all, and if you want a fun, quick summer read, I highly recommend it. It just didn't work for me.

I think the worst offender about this for me was that it was predictable. 30 pages in, I could give the general outline and fill in a lot of the finer details. Nothing came as a surprise to me, and it started to get to the point where I just wanted to hurry and finish reading so I could make sure I was right. I was a little frustrated that the characters weren't getting to their conclusions faster. There was a little twist about two-thirds of the way in, which was a small little surprise, except I had had suspicions for a lot of the book. The little hints and clues felt very obvious to me, and I had guessed what was going to happen by the middle.

I wasn't very impressed with the main characters, either. Em was typical, Cade was typical, the stark differences between her family and Aunt Tilly were typical. The evolutions of each one were exactly as expected, too. Each one felt like it followed a character profile outline: the introduction, the first impression, the character believing they were something and then realizing that maybe they weren't...slow learning, a huge obstacle, recovery. It was like a class in fiction writing, where it followed every instruction to a T. On one hand, that's good - it is a story, it has the necessary elements. But as a reader, I felt it unoriginal and, frankly, boring.

See, all negative - and I feel bad for that. But the story isn't really that bad! The girl grows and learns and is relatable in some sense. It's like Em is a generalized version of all 18-year-olds - everyone will see some sort of themselves in her, but nothing really connects. While the romance didn't blow me away, it is very solidly sweet, and I can hope to have something like that one day, too.

Something I really did love was the description of the island. I am fortunate to live on the West Coast, a mere 20 minute drive from the ocean - it's a paradise, and I forget that often. The description of the town and summering away are spot on, and it made me ache for vacations and getting away from normal life.

The only part of Em that I related to was her lack of realization that she didn't have to follow what her parents wanted. I grew up with certain thoughts, ideals and rules that were so ingrained into me that they just were. While I thought the novel could have explored the feeling deeper, I definitely understood that feeling of realization Em often goes through.

Obviously, this wasn't a book for me, but I don't deny that it's still a solid story to read laying out on a towel soaking in the sun and surf. Even though I found myself frustrated and impatient for most of the read, I enjoyed some of the finer details.