On Tuesday (May 8), the Summer Lovin' Tour with Jenny Han, Jessi Kirby and Morgan Matson came to Huntington Beach -- and I was stoked to find out I would be able to drive up! I suck and didn't take a picture of the 3 of them together, nor did I get a picture with Jenny Han (I told you, I suck), but it was still TONS of fun. I absolutely adore each of these authors: Amy & Roger's Epic Detour is still one of the best, most perfect YA novels in my opinion (read my review here!), I snagged an early copy of In Honor and was reduced to tears by how wonderful it was (read my review here!), and even though I hadn't read anything by Jenny Han yet, I'd heard great things, I love her Tumblr and I'm actually in the middle of The Summer I Turned Pretty (and love it already). Safe to say, I was SUPER excited to get to meet them all in person!

They each started out introducing their own books and reading passages from them. Jessi read Finn's letter to Honor from In Honor (I started tearing up, and I'd already read it!); Morgan read the scene from Second Chance Summer when the family is just arriving at their old house; and Jenny read a flashback scene from Christmas from We'll Always Have Summer. It was hilarious because the store's security alarm kept going off, and Jenny seamlessly worked it in as special sound effects to her passage - so awesome.

After, they each asked each other questions and then opened it up to the audience for questions, where they'd bribe reward askers with Skittles.  As per my usual, bullet point recap! 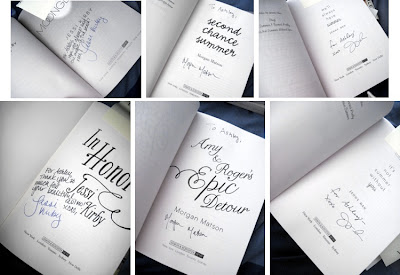 And they were troopers as well and signed every single book that everyone had. They took the time to talk to each person individually and were so, so sweet. Morgan and I discussed Europe (she recognized me from Twitter and asked about my handle) and road tripping, Jenny and I talked about our dresses (hers was SO cute, I'm so mad I didn't get a picture!), and Jessi not only recognized me from Twitter but remembered my review about In Honor! I was floored that she'd read it and remembered (that also makes me incredibly nervous haha), and told me it made her cry. In all fairness, In Honor made ME cry! 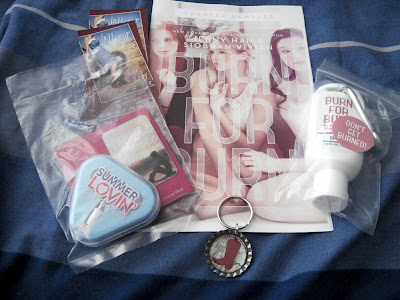 This tour definitely had some of the most fun swag I've ever seen! I realized after that I had been too busy talking with Morgan and Jenny and forgot to grab their book postcards and/or bookmarks :( There's a keychain with red boots for In Honor (Jessi even wore her own boots to the event!) and bookmarks; a pair of earbuds and personalized playlists for each of the authors' current books*; and a small bottle of sunscreen and a Chapter sampler for Burn For Burn**!

All in all, a super fun time! They just wrapped their tour tonight, but if you ever have a chance to see or meet them, don't hesitate; they're wonderful.

*For those wondering, here are the playlists!
We'll Always Have Summer: Summer Breeze - Seals and Crofts | So Long, So Long - Dashboard Confessional | Summertime - Will Smith
In Honor: Fallin' For You - Colbie Caillat | On My Mind - Donavon Frankenreiter | Sparks Fly - Taylor Swift

**I have an ARC of Burn For Burn and don't need the Chapter sampler...anyone want the sampler? I can pop it in the mail (US only).
Posted by Ashley @ Ashley Loves Books at 12:10 AM