Mysterious Galaxy, one of San Diego's independent bookstores, celebrated their 19th Birthday today with goodies, deals and a massive signing spree of authors. Part of the celebration was the YA portion, where Brodi Ashton, author of Everneath, and Bree Despain, author of The Dark Divine trilogy, came and talked for a bit then signed.  Unfortunately, I haven't read any of the books either of them have written, but I have heard tons about them and heard great things. (I've adored Everneath for the cover for a long time...I want that dress!)
Because they were only given an hour, the talks were brief but still a ton of fun and lots of laughing. They introduced each other, answered questions, talked about why they write in paranormal, and then read excerpts from their books. Bree read an excerpt from The Dark Divine since anything from The Savage Grace would have been spoilery.


And then they were incredibly awesome and chatted with everyone who were there to get books signed. I'm unfortunately poor and couldn't afford to pick up all of Bree's books, but I did grab the first one at least, and I took the copy of Everneath I already have. I got to give suggestions to Brodi about where they should go for their day-stay in San Diego, but I got super nervous haha. I hope she didn't hate any of the places if she took me up on it! Both were SUPER nice and friendly. 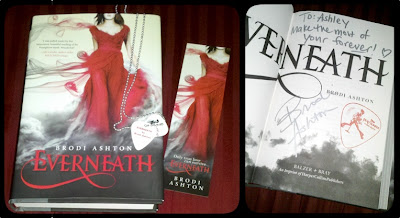 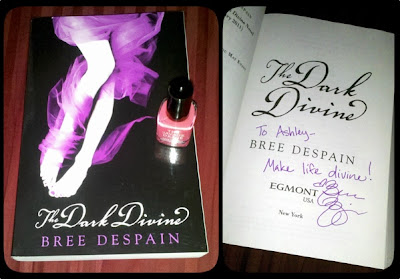 I know they're originally from Utah so I'm not sure how often they sign around there or come out to the Coasts, but if ever a chance to meet them, go! They're tons of fun.
Posted by Ashley @ Ashley Loves Books at 8:12 PM