Review: A Thousand Pieces of You by Claudia Gray (ARC) 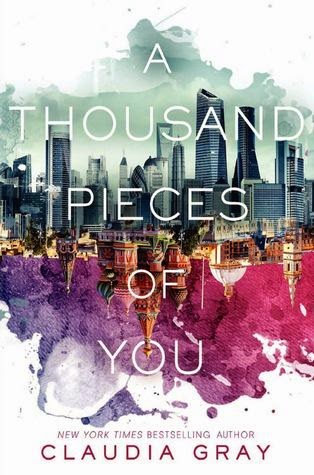 A Thousand Pieces of You (Firebird #1) by Claudia Gray
Harper Teen, 368 pages
Expected US Release Date: November 4, 2014
Format/Source: ARC via Around the World Tours - thank you!

Marguerite Caine’s physicist parents are known for their radical scientific achievements. Their most astonishing invention: the Firebird, which allows users to jump into parallel universes, some vastly altered from our own. But when Marguerite’s father is murdered, the killer—her parent’s handsome and enigmatic assistant Paul—escapes into another dimension before the law can touch him.

Marguerite can’t let the man who destroyed her family go free, and she races after Paul through different universes, where their lives entangle in increasingly familiar ways. With each encounter she begins to question Paul’s guilt—and her own heart. Soon she discovers the truth behind her father’s death is more sinister than she ever could have imagined.

A Thousand Pieces of You explores a reality where we witness the countless other lives we might lead in an amazingly intricate multiverse, and ask whether, amid infinite possibilities, one love can endure.
------------------------------Goodreads summary

I was a little nervous heading into A Thousand Pieces of You, since I’m a self-admitted time travel hater. I can’t stand time traveling in anything, and I figured this concept of layers of fate would translate the same to me. And it didn’t help when I disliked the beginning pages so much—the storytelling seemed off to me, and I was annoyed with how abstract it felt. I couldn’t grasp at much, and I wanted to give up on it.

I am so, so glad I never did. It quickly turned into this fascinating concept of traveling within your fates, and I was 100% onboard with the idea when it introduced the boundary of only being able to travel to a layer you would actually exist in. THAT was such a tiny but important element that it completely won me over, in every way. It was creative and logical and sensical and brilliant all in one.

Ignoring how I felt about the first few pages, A Thousand Pieces of You just flies by—the pace just keeps picking up and going on and on and you feel like you’re swept away on this amazing, terrifying adventure. The amount of creativity and how stunningly unique all the stories and time periods were just fascinating, and I felt like I fell in love so many times over. Not just with the characters, but with the words and story and the simple idea that all these common words together can still create a breathtaking novel.

I quite liked each character as well, though it took me awhile to come around to Marguerite. Theo I was quick to like and quick to fluctuate on; and Paul pulled me in every single direction. Meeting each of them in each layer was also an interesting facet—while sometimes I felt like they were a little too different to actually be the same character, they relatively retained the same characteristics and personalities throughout. What was solid and true remained, and while it took some digging, a reader can find it and fall in love with them.

I’ve been seeing some complaints about the sci-fi missing in a novel that’s advertised as sci-fi…and I could see that, actually. But for me it was one of the best parts! I’m not a sci-fi reader by any means—it’s not that I hate it, I’m just not particularly drawn to it. I’ve read some ok sci-fi, some good sci-fi, and some brilliant sci-fi, in all age ranges…but it still isn’t something I will seek out. So when A Thousand Pieces of You turned into a sci-fi-but-not-fully-sci-fi, it totally worked for me. There was a little bit of historical elements, a lot of futuristic things, and a whole lot of contemporary and romance and general storytelling. It was nice to not be completely stuck in one genre, and I thought it worked really well with the story itself.

Quite obviously, I was thrilled with the first book in the Firebird series. Great characters, a wonderful, fast-moving plot with one of the most original, fascinating concepts of “fate traveling” I’ve ever seen—I can’t wait to see what else we have in store for this organization and these characters.

Posted by Ashley @ Ashley Loves Books at 12:00 AM 0 comments

I've got too many books, so you get to help me clear the clutter! 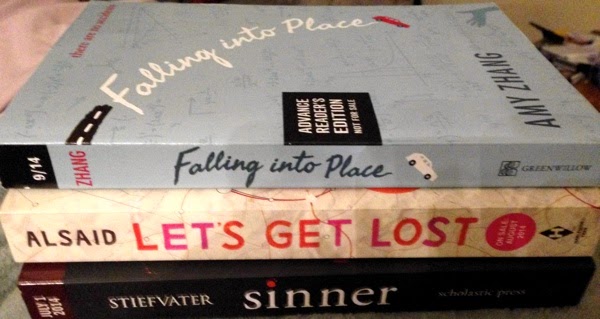 Please do not leave your email in my comment section.
Enter through the rafflecopter below, and all my usual giveaway policy rules apply.
Good luck!
a Rafflecopter giveaway
May the odds be ever in your favour!
Posted by Ashley @ Ashley Loves Books at 12:44 AM 14 comments

Email ThisBlogThis!Share to TwitterShare to FacebookShare to Pinterest
Labels: giveaway 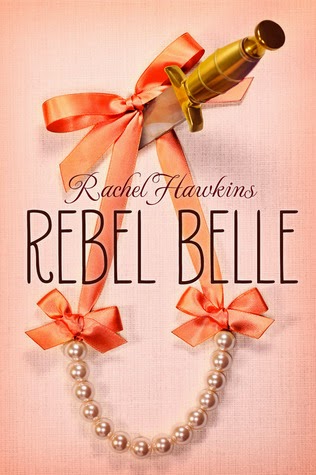 Harper Price, peerless Southern belle, was born ready for a Homecoming tiara. But after a strange run-in at the dance imbues her with incredible abilities, Harper's destiny takes a turn for the seriously weird. She becomes a Paladin, one of an ancient line of guardians with agility, super strength and lethal fighting instincts.

Just when life can't get any more disastrously crazy, Harper finds out who she's charged to protect: David Stark, school reporter, subject of a mysterious prophecy and possibly Harper's least favorite person. But things get complicated when Harper starts falling for him—and discovers that David's own fate could very well be to destroy Earth.

With snappy banter, cotillion dresses, non-stop action and a touch of magic, this new young adult series from bestseller Rachel Hawkins is going to make y'all beg for more.
-------------------------Goodreads Summary

Notable Quote
I needed my mentor-person right now. I had figured out as much as I possibly could, so it was time for my Giles or my Professor X or whoever to get here and start explaining.

Rebel Belle isn’t something I’d normally gravitate to (honest truth: because of the cover. I seriously hate pink.), but I kind of had a fiending to read about more kick ass girl characters. And if there’s one that sounds like it will fit the bill, it’s Rebel Belle by Rachel Hawkins.

I always have a habit of reading acknowledgements before I read the book, and I have to say Rachel’s pitch of Legally Blonde meets The Terminator is spot on. This is such a fun, quirky read. This class president, cotillion Queen kickin’ ass and killing people with her shoes?! That’s so awesome.

I liked the general storyline, why David Stark needs protecting and how it all falls on Harper and Saylor. The history is interesting and makes for endless possibilities as they move through the days. The setting was probably something I loved best—I grew up in Europe and southern California. I have absolutely no idea about the South and southern belles, and I loved the houses and buildings; especially the Tea House and Magnolia House. I really felt like I could picture those places, like I was really there drinking tea or sweeping down the steps.

One of my only issues with this book is that I feel like I had to suspend my reality a bit. More than the obvious, I mean. There are certain situations where I just kept thinking of all the ways the assassin/killer person should have done something, or that if so-and-so had simply done this, it would have worked. (This is kind of hard to discuss without giving away a lot of key elements haha.) It’s not that what happened didn’t work, it was just…unnecessarily complicated for the sake of the story, and I couldn’t help feeling like the better solutions were glaringly obvious.

Still, Rebel Belle was a ton of fun to read. It’s quick and light with just enough heaviness and drama and issues to pull you in and keep going. I loved all the various ways Rachel Hawkins was able to get super kickass ninja skills mixed in with shoe shopping and refraining from curse words. If anything, everyone should read this to meet Harper: she's a little bit of you, a little bit of me, a little bit of everyone with some great superhero-like powers to boot.

How is it already October?! My goodness, you guys. I just don't understand how a year can go by so freakin' fast. I'm already knee deep in my party planning and holiday happenings, both for personal life and my work. I'm planning my work's Anniversary party--it's in JANUARY!
How's life, everyone? I'm in a weird stage of finally being able to manage work and trying to get back into the swing of life. I'm going to admit that I heavily considered giving up on my blog and going on hiatus…but every single time I seriously thought about it, I became so sad and distraught at the idea that I finally realized it meant I shouldn't do it. I love this piece of my life, and I'm not ready to let it go yet. If ever.
So of course I'm going to ruin any time I may have by…possibly doing NaNoWriMo! Anyone else taking it on? I try it every year for the last 6 years but have only won twice. Maybe this will be the third? A girl can dream.


In case you missed it...
Just Like the Movies by Kelly Fiore
Broken Hearts, Fences, and Other Things To Mend by Katie Finn
A Blind Spot For Boys by Justina Chen
Lies We Tell Ourselves by Robin Telley
Falling Into Place by Amy Zhang
Top Ten Books That Were Hard For Me To Read

Special News
My review of Lies We Tell Ourselves was published in the Australian Times Books magazine!
Check it out here!

Coming up...
Reviews of A Thousand Pieces of You by Claudia Gray, Rebel Belle by Rachel Hawkins, and The Jewel by Amy Ewing. I'll share my TBR for the rest of the year, and I've also got way too many books piling up in my house, so it's time to purge some ARCs--which means giveaway time coming soon! 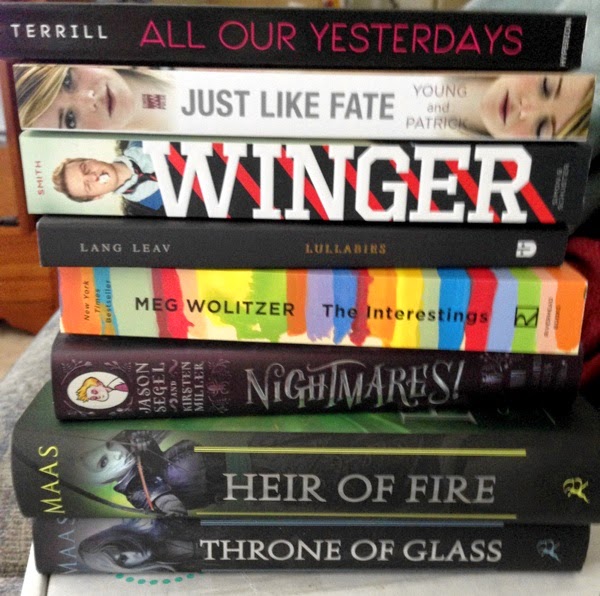 Throne of Glass (TOG#1) by Sarah J. Maas (I had to have a matching hardcover set!)
Heir of Fire (TOG #3) by Sarah J. Maas
Nightmares! by Jason Segal and Kirsten Miller
The Interestings by Meg Wolitzer
Lullabies by Lang Leav
Winger by Andrew Smith
Just Like Fate by Cat Patrick and Suzanne Young
All Our Yesterdays by Cristin Terrill

What books came into your possession recently?
Leave your link and I'll hop by!
Posted by Ashley @ Ashley Loves Books at 10:02 AM 5 comments