Review: The Story of Us by Deb Caletti 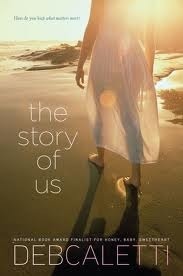 Cricket’s on a self-imposed break from her longtime boyfriend—but she’s picked a bad week to sort out her love life. For one thing, her mother’s romance is taking center stage: After jilting two previous fiancés, her mom is finally marrying Dan Jax, whom Cricket loves. But as wedding attendees arrive for a week of festivities at a guesthouse whose hippie owners have a sweet, sexy son—Ash—complications arise:

Cricket’s future stepsisters make it clear they’re not happy about the marriage. An old friend decides this is the week to declare his love for Cricket. Grandpa chooses to reveal a big secret at a family gathering. Dan’s ex-wife shows up. And even the dogs—Cricket’s old, ill Jupiter and Dan’s young, lively Cruiser—seem to be declaring war.

While Cricket fears that Dan is in danger of becoming ditched husband-to-be number three, she’s also alarmed by her own desires. Because even though her boyfriend looms large in her mind, Ash is right in front of her....
-------------------------Goodreads summary

Notable Quote
Stories are what you have when the place is gone and the dried-up roses have crumbled and the ring is lost and that old car is finally junked. Stories are where the meaning ends up.

This is definitely another one of those books I wished I had when I was graduating high school or college (see also: The Disenchantments by Nina LaCour, It's Kind of a Funny Story by Ned Vizzini, An Off Year by Claire Zulkey) - it would have helped me SO much at the time, and probably would have made me feel better, like I wasn't alone with all my feelings.

The book follows Cricket through the week leading up to her mother's marriage, which creates complete chaos as all the family comes together and Cricket tries to figure out her future, where she stands with her long-time boyfriend, and how to cope with all the change that is going on in her life. It's a sweet story, filled with equal parts sarcasm, fun, funny and meaningful.

My favourite element of the story was the emphasis on family, and how much it can mean. Even when a family is divorced or going through tough times, there was still that love and caring there. The dynamic between Cricket, her mother and her brother, Ben, was so sweet and lovable - I absolutely adored any of their interactions. It definitely reminded me of my family: I'm incredibly close with my brother and parents, and I loved seeing this reflected in a book. Often in YA, it's a broken family -- and while Cricket's isn't perfect, the relationships are solidly there.

I think I was expecting more romance in the book - I mean, the title, the synopsis, everything we know about it points to that, right? I'm not entirely disappointed that it wasn't as big as I thought it would be, but it was definitely surprising. The little romance that was there is sweet and funny, and I was hanging onto Cricket's words trying to figure out just what it was that she had done to Janssen and what would happen. I admit the "big reveal" seemed anticlimactic, but it actually fit the story really, really well. Being left in the dark for most of the novel about what she'd done makes for an interesting read, in that I just wasn't sure how to feel about her and Janssen, or her with Ash, or all the issues she was going through. I mean, how could I judge it when I don't quite know what I'm judging? I'm on the fence if that was brilliant or not, because I definitely kept reading to find out.

I've heard that a lot of people found the characters to be one dimensional - and sure, a few seemed to be. But the main characters, the big ones that mattered, were fine. I really loved Cricket, because I felt like she's a past version of myself when I was going through that weird time of just graduated and trying to figure out what the hell I was going to do with my life. That period of "New Adult" is a truly terrifying time, and Cricket captured it really well. I laughed at all the imagined disaster scenarios, because that's definitely how I used to be at that time. I was also amazed at how fully I felt like I knew Janssen, and he's not even really in the novel! He's just outside of it, the recipient to her letters and part of the memories she reveals. But through her letters and recounting their story, I felt like he was just as real as the ones that were staying in the beach house with them.

I'm also in love with Cricket's brother, Ben. He was so sweet and funny and such a perfect Boy character. He was a wonderful older brother, and I kind of wish I knew him in real life. Definitely a "good guy." (I guess you have to have read it to get that.)

And there's no way I could write a review of this without mentioning Jupiter, their dog. I was surprised at how infused dogs were in the story, and I do think that it could be a turn off to some readers. Five years ago, I wouldn't have gotten any of the dog love in the story: I never had a pet growing up, none of my friends did, and I didn't understand what it meant to have a pet. But one of my past jobs had dogs in the office, and I learned to love them and how they really become such a part of your life. I haven't worked at that office in 6 months and I still miss the dogs every day! So because I went through that, I understand all that Jupiter meant to the family and loved it that much more. She was such a fun personality to have around, and leant an awesome and unique structure to the story.

I felt like this book had a bit of everything in it: family, the pondering of future, relationships, friendships, divorced parents, struggling relationships, pets, possible new relationships, step-siblings, miscommunications and misunderstandings, reconciliation and moving on. While sometimes that did feel like the sheer quantity may have detracted from the quality of each element, I think it was still done well and comes together as a solid, wonderful contemporary novel.

The Story of Us is a great read for those who remember (or are going through) that awkward period of change in life. When the leaving and the going meld together into that chaotic mess of how it will all work out. When the relationship seems to be on the cusp of Something Big. When the past has to reconcile all the Could Bes of the future. While it's not the fastest moving novel (though the wedding scene had me cracking up with all the action!), the meaning and wisdom make it more than worth it.