I don't mention it often on here since I'm a YA-centric blog, but I freakin' LOVE Jen Lancaster. For those unfamiliar, she's a humor memoirist and fiction writer. I heard of her when Such A Pretty Fat was getting huge, and was delighted to find out it was her third book; I absolutely devoured the three as soon as I could get my hands on them. She's so funny and has such an awesomely sarcastic outlook on life. I pretty much want to hang out with her and Fletch and Maisy all day, with a cocktail.

Well, she stopped in San Diego last week for her Jeneration X promo tour, and I was happy to find my way down there. I was SUPER late, so I definitely missed the first 20 minutes or so -- but she was still awesome and hilarious, anyway. She started with reading a passage from Jeneration X, then moved into answering questions from the audience. As usual, bullet point recap! 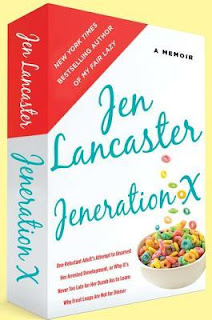 Seriously, I had to stop taking notes because I found everything funny and awesome with her.


I didn't get anything signed; a bit because the crowd was SO big it would have taken me 9823479 hours to get to her since I didn't have a wristband yet, but mostly because I already own 2 of her books in paperback and Jeneration X (which I think BN was being super strict about and you had to have that to get something signed) is only in hardcover. I'm neurotic and can't have mixed formats, so I decided that just seeing her and being there was enough.

I'll probably regret that in like a week, when I never have a chance to see her again, but that's ok!

If you ever have a chance of going to an appearance of hers, or if you're in time for one of her many TV appearances, seriously, DO IT. She's hilarious and awesome.  And if you haven't read any of her memoirs, I highly recommend them.
Posted by Ashley @ Ashley Loves Books at 5:00 PM