You know what I didn't do this weekend? 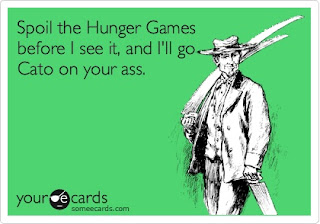 I think I may be the only one in the world to not have seen The Hunger Games this weekend.

Not because I don't want to see it, because oh I definitely want to. But 1) it was my birthday weekend, and I spent a lot of it away and partying with friends.  2) I'm really weird about movie versions of books, and I'm not sure I trust any of my friends to see me like that. and 3) I'm also very weird about the crowds I see movies with, and I was a little weary of all the teens and tweens who would be fangirling like crazy. I mean, I'm Team Peeta all the way and all, but I refuse to squeal it when he comes on screen.

I'm also neurotic, but I sense you've guessed this.

In any case, no, I did not see the movie yet. I think I will Tuesday morning because the theaters around here have a special deal that the first Tuesday showings are only $6 - how can you pass that up?! It is pretty damn amazing that it did so well: $155 million over the weekend? $68 million on its opening day?!  Best showing for a non-sequal...I'm so proud of a little YA book.

I am going crazy not having seen it though! I keep hearing so much about it, and while nothing can really be spoiled, per se, it still feels like I've got to avoid a lot of spoilers.

So, to abate my anticipation in seeing this film, I thought I'd post some humor! Hunger Games humor is like a weird twisted sickness, because it's like...teens killing teens isn't funny, but c'mon...so much fun!

Anyone else not see the movie?
And if you did, tell me if you liked it!
(But please, no spoilers :))

*all images were found via pinterest - I tried to trace sources, but most of it was just tumblr.
If you know the source, I'll gladly update to include the links!
Posted by Ashley @ Ashley Loves Books at 1:49 AM