Review: The Secret Sisterhood of Heartbreakers by Lynn Weingarten 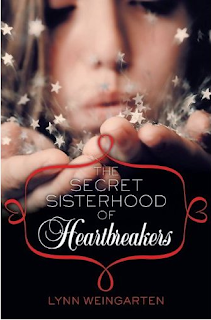 If there’s an upside to having your heart broken, it’s this: A broken heart makes you brave.

The first day of sophomore year doesn’t go the way Lucy planned. After a summer apart from her boyfriend, she’s ready to greet him with a special surprise and instead gets a shocking one in return: He’s breaking up with her. Beyond devastated, Lucy has no idea how she’s going to make it through homeroom, let alone the rest of her life.

Enter three stunning girls with the unnatural ability to attract boys and an offer Lucy can’t refuse: They can heal her heart in an instant. And then she’ll be one of them—a member of a sisterhood that is impervious to heartbreak and has access to magic distilled from the tears of brokenhearted boys. But to gain their power, Lucy must get a guy to fall in love with her the old-fashioned way, and then break his heart in the next seven days.

Notable Quote
Real love, the pure and true kind that comes along so rarely, is the greatest magic there is.
It is the art and the drug and the story.

This book pops up often on my blog because I freakin' ADORE the cover. The stars are wonderful, I love the font choice and that little loopy-scrolly thing that frames the title...love love love.

Can I ask, anyone who has read a finished copy of this book, were the paragraphs indentations weird for you? Because it felt like the indents weren't big enough. It's like in blogger or websites where you can't use "TAB" to indent a new paragraph, so you end up doing 5 spaces? It feels like this, but the book only did 3 spaces, and subsequently everything felt so crowded to the point of distraction. (Obviously.)

I was already lukewarm on Lucy from Page 1, and when I started getting distracted by the format of the book about 30 pages in, I had that sinking-heart feeling. It just didn't bode well. I was hoping so hard that it would pick up. I was hoping that the Sisterhood would bring in mystery and intrigue, I was hoping Lucy would learn her lessons, I was hoping for more Tristan, I was just hoping...and unfortunately it never come through for me.

It came down to two things: 1) Everything seemed incredibly cliched, and 2) so much more could have been done, better.  It's weird, because it's such an original idea; and I still like the idea of a sisterhood of heartbreakers, who take control and use heartbreak for power -- it's a bit twisted and appeals to that whole revenge thing that always seeps into our hearts after a break has happened.  But the characters, a lot of the plot lines, everything was just so stereotypical. Every single generic YA character was accounted for, and very few of them had anything that stood out.  As for it lacking, I felt like there could have been different ways to test Lucy, more interactions with different boys, more development to her character, more with her parents, just more everything.

Alex was possibly the character who I did not like the most, because he was so horrible that I couldn't understand why Lucy was trying so hard to get him back. I never, ever got the sense that they had a good relationship. It always seemed hurtful and missing something, so I couldn't fathom why Lucy would want it back (other than the fact he was her "first love" - which I couldn't find a single reason as to why, anyway).

The only characters who did anything to me were Tristan and Collin, who I thought were adorable. I knew from the moment Tristan entered the picture crunching on his lollipops and playing his mournful harmonica what would happen with him; as I knew with Collin since he was that sensitive, puppy-dog type. There was so much more potential for both of them, but they were just tools in a sad game.

The one thing I will say about Lynn Weingarten is that she definitely understands the intricacies of boys and girls, of relationships and flirtations and responses. While it was weird to see it all laid out and explained (shouldn't it have been shown, not told?), all of it is the truth: there really are certain ways to open up to guys, to get their attention, to become friends with them and understand the psyche.  And the introspection into girls' hearts and how fragile they are is spot on. It's a complex life, and Ms. Weingarten does well telling it all.

I'm going to give the book a bit of a break and say that maybe it didn't do much for me because I am older. Most of the lessons, I've heard before and learned the hard way (unfortunately).  I'm 25, I've dealt with confidence, heartbreak, and what boys respond to.  So yes, that might have been why I had a problem with it. I could see how a 15-year-old reading may find it all a revelation and really find solace. I may be old, but I remember what it felt like to get my heart broken at 16; I was devastated, and I would have done anything to get him back (funny enough, the boy who broke my heart was also named Alex...). While a lot of the hurt was real, there just wasn't enough substance for me to attach to.

AND YET: even after all this negativity...I'm totally going to read the sequel. Not because I have high, high hopes or that I'm looking for redemption; but because I feel like the next book could be what I was looking for this entire time: the Sisterhood, and what they do with all these Heartbreaking powers.

Even though I didn't like this book, I know a lot of people who did. Read a few other reviews here:
Candace's Book Blog
The Princess of Storyland
In the Best Worlds
Chick Loves Lit
Forever Young Adult