Review: Try Not To Breathe by Jennifer R. Hubbard -- in which I get a little personal. 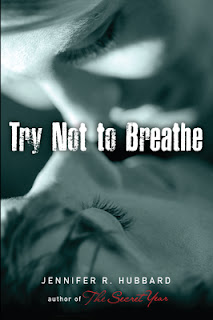 
Learning to live is more than just choosing not to die, as sixteen-year-old Ryan discovers in the year following his suicide attempt. Despite his mother’s anxious hovering and the rumors at school, he’s trying to forget the darkness from which he has escaped. But it doesn’t help that he’s still hiding guilty secrets, or that he longs for a girl who may not return his feelings. Then he befriends Nicki, who is using psychics to seek contact with her dead father. This unlikely friendship thaws Ryan to the point where he can face the worst in himself. He and Nicki confide in one another the things they never thought they’d tell anyone—but their confessions are trickier than they seem, and the fallout tests the bounds of friendship and forgiveness.
-----------------------------Goodreads summary

Notable Quote
Sometimes, almost getting what you want is worse than never coming close.

This review is about to get real, guys, because this book made me a little uncomfortable.  There was nothing racy, horrible, awful -- it was uncomfortable because I saw a little too much of myself in it. There were so many passages that just ripped at my heart and opened up some wounds that I thought were behind me.

I'm not saying I ever tried to kill myself. But I'm not not saying that I haven't ever thought about it, and I'm not not saying there isn't darkness in my past. What I am saying is that Ryan's guilt and anxiety and thoughts were just a little too close to me, and I started to squirm as I was reading. I physically had to close this book and step away, and I just stared at it as I tried to gather my thoughts and feelings.

Nicki was a little harder for me to connect to, simply because I had a feeling she wasn't being truthful from the beginning. I don't know what it was, but how she just popped up in Ryan's life suddenly and started asking questions...there was something about her approach to him that didn't sit right with me, so it was a little harder for me to get into her character.

One of the larger issues I had with this book is it didn't offer much hope. I'm not expecting a book to have Suicide Hotline ads every other page, or that freakishly annoying character that's like "but life is so GREAT!" every second -- but I was a little stunned at how bleak the book is in its entirety.  Sure, Ryan and Val do their best with Jake, with dealing with life; and I really liked towards the end at the realization that lives are just ups and downs and that is just how it is -- but it's not a book I would recommend a friend who was going through a difficult time.  Simply because I'm not sure it would lift them in the end.

The book would, however, offer solace in the fact that you are not alone if you're depressed, having a hard time, suffering with intense anxiety. The motivations behind each character are very real, and very raw -- to the point where my heart ached for Jake or Ryan's mom, or I had a lump in my throat during tough situations, or even started to shut down and feel like I was behind that same glass wall.

The glass wall. Oh, the glass wall - if ever a perfect metaphor for the things I went through in my past, it would be that.  I think Ryan's description of feeling behind that wall as as well as the parts of being numb -- that was what resonated most with me. Because that's exactly what I was going through at one point, and I know it's what a lot of people have gone through.

If you want to read a real situation that leads to even more serious situations -- this is it.  It really offers an insight and understanding to a middle-class depression.