Review: Wanderlove by Kirsten Hubbard - in which I implore you to read this book RIGHT NOW. 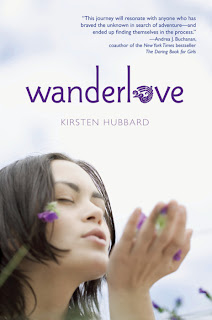 It all begins with a stupid question:

Are you a Global Vagabond?

No, but 18-year-old Bria Sandoval wants to be. In a quest for independence, her neglected art, and no-strings-attached hookups, she signs up for a guided tour of Central America—the wrong one. Middle-aged tourists with fanny packs are hardly the key to self-rediscovery. When Bria meets Rowan, devoted backpacker and dive instructor, and his outspokenly humanitarian sister Starling, she seizes the chance to ditch her group and join them off the beaten path.

Bria's a good girl trying to go bad. Rowan's a bad boy trying to stay good. As they travel across a panorama of Mayan villages, remote Belizean islands, and hostels plagued with jungle beasties, they discover what they've got in common: both seek to leave behind the old versions of themselves. And the secret to escaping the past, Rowan’s found, is to keep moving forward.

But Bria comes to realize she can't run forever, no matter what Rowan says. If she ever wants the courage to fall for someone worthwhile, she has to start looking back.
----------Goodreads Summary

Notable Quote
Wanderlove is about forgetting the bad things and focusing on the good.
Out with the old and in with the new.

Not even joking: this book gave me a panic attack.

Not in a bad way, really (who knew panic attacks could signify good?) - it's just that it made me feel so many things all at once that were so personal and so deep and buried in me that it all came out in weird, gasp-y breaths and dizziness and all-around general overwhelming emotion.  It is that good.

Like many others, this book made me want to grab a pack and run out my door, booking the first ticket to anywhere immediately.  I grew up traveling, a byproduct of a Navy dad who moved his family with him around the world for every relocation, and I've never lived in any one place longer than 3-5 years. My life is a far cry from backpacking Central America (mine was more...suburban European life), but the travel bug hits you all the same: go, and see.  And see.

Told through Bria, an 18-year-old high school graduate searching for escape from a bad relationship that had unfortunate echoes in every other aspect of her life, Kirsten Hubbard creates perhaps one of the most relatable characters in literature today: lost, and hurt, and snubbed, and searching in that miserable period of recovery and discovery. An artist who feels everything, a teenager who wants everything, and a newbie traveler who learns to risk everything, every reader is going to find a little (or a lot) of themselves in Bria.

In my case, it was a lot. Because it's a lot of personal things that don't necessarily belong in a review, I won't get into it: but let me just say that there were moments on every single page that had me loving Bria more, rooting for her, wanting for her.  I wanted to absolutely kill Toby the moment I started reading about him, and I applauded Bria's sensibility in regards to Rowan (I don't think I'd be able to resist!).  Even Starling, who is entirely a girl who I would not like and would be annoyed by in real life, made me like her.

And even though I feel like I'm walking the lines of creepy in relation to Bria, she is probably one of my favourite female characters in literature: because she's real. I loved that even though she is a bit bruised and broken and struggling, it didn't make her less STRONG. She had personality and conviction, and a hell of a lot of travel balls whether she realized it or not. She was insecure and willful and brave and confused and it is absolutely glorious.

I was also so in love with Rowan and Bria's friendship. I mean, I'm completely in love with vagabond Rowan as well, but more so with them as travel companions. I was surprised to realize halfway through the book that I wasn't even sure if I did want them to be together (something I assumed would happen, I legitimately had no idea!) because they had this tenuous, fragile friendship and understanding. I loved that Bria wouldn't hear about Rowan's past from anyone but him, I loved that they had moments of true honesty despite all the hidden pasts. Like the rest of the book, it felt real, like I was watching a relationship form into a very solid, very trusting partnership.  The little snaps of flirtation were icing on a perfect cake.

Honestly, I just beg everyone to read this book.  It's a beautiful book, filled with heart-wrenching meaning and yearning and understanding love and wanderlove and how sometimes, the past really does belong in the past; and that, even more, sometimes things really are worth fighting for.