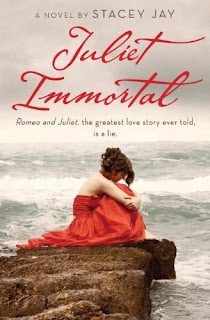 "These violent delights have violent ends
And in their triumph die, like fire and powder,
Which as they kiss consume."
—Romeo and Juliet by William Shakespeare

The most tragic love story in history . . .

Juliet Capulet didn't take her own life. She was murdered by the person she trusted most, her new husband, Romeo Montague, a sacrifice made to ensure his own immortality. But what Romeo didn't anticipate was that Juliet would be granted eternity, as well, and would become an agent for the Ambassadors of Light. For 700 years, she's fought Romeo for the souls of true lovers, struggling to preserve romantic love and the lives of the innocent. Until the day she meets someone she's forbidden to love, and Romeo, oh Romeo, will do everything in his power to destroy that love.
---------------------Goodreads summary

Notable Quote
I can never love him, no matter how much I might fear the hell he describes. Fear can force obedience, but it can never transform a heart.

Normally when I finish a book, I sit down and write the review as soon as possible - it's all fresh in my head, I can use the lingering emotions and put them to the paper (or screen, as the case may be).  But not with Juliet Immortal.  I was very...mixed...when I closed the last page, and had to walk away and spend the evening thinking about it.

Here's the thing: I adore Romeo & Juliet. I'm a big Shakespeare fan (Taming of the Shrew will always be a favourite), and I totally buy into the tragic love story of Romeo & Juliet. I'm not going to go as far as saying I want that kind of love (living would be preferable), but...you know. I'm a big romantic. I want the love worth dying for, the grand gestures and that thrill.

So wrapping my head around the idea that not only is all that a lie, but that Romeo is a douchebag of epic proportions and Juliet has a burning (and well-deserved) hatred for him; and they're locked in eternity to forever work against each other for the sake of love and humanity?  It's weird, yo. Weird.

And I admit that that was a driving reason why I didn't really like it. I tried hard to let it go, but just seeing the names "Romeo" and "Juliet" make you feel something - so it was difficult. Plus, I don't really read fantastical novels often. Magic and forces and spirits don't do much for me.

Let's talk plot: the concept is really interesting. That these eternal soul mates are fighting for Good (Ambassadors) and Evil (Mercenaries), inhabiting bodies while they try to influence two others to either commit to their love (Juliet) or break them forever (Romeo).  It was intriguing and filled with action and a little creepy and, I'll admit, I was hooked into it from the very beginning. Opening with that little chase scene was...fabulous. And it never really comes down from there. It's high intensity, it plays with your thoughts and emotions, and you start to wonder if maybe Romeo isn't as terrible as the book plays him out to be, maybe Juliet is just a mistrusting selfish person seriously lacking in self-awareness.

So, characters: I had some problems. Juliet was perfect, in my opinion: just the right amount of confused and loving and doing her job and tormented.  Ben was easily the favorite, and very easy to fall in love with. Gemma fell flat with me though, despite that she was supposed to be this hot-and-mostly-cold best friend who is actually terrible towards Ariel. Romeo was probably the worst: I just couldn't feel anything other than disgust towards him. He was a sociopath and a psychopath with absolutely nothing redeeming - and it's tough to read a novel where you just want to kill off a character from page 2. Especially this novel, when it feels like you're supposed to want to believe in him at some parts. I just couldn't.

Some of the writing is cheesy, but nothing that's off-putting. And I also liked the framing of Ariel and Melanie.  Their relationship is a bit heartbreaking, but hopeful; and it was surprisingly the thing I was rooting for most.

When I first finished the book, I knew my star rating was going to be a 3. I was having problems with the storyline, I disliked Romeo so much I just couldn't take it, I wasn't too thrilled with parts of the ending or Nurse and all the secrets.

But then I realized that I'd read the book in about 3 hours. And I was sucked into it, and I enjoyed most of it, and I was a little in love with Ben and had held my breathe for the last 100-or-so pages. And most of all, the book had made me ache: for a past love, for the missing love I have, for all the future and the hoping and the wishing I know I've got in my future regarding love. It made me consider soul mates (something I steadfastly do not believe in), it made me want so hard to believe in enduring love and the realness of love and in the power of it.

And even though I may have had some problems with it, the writing made me feel, and think, and want -- which is what we all kind of want from a novel anyway.