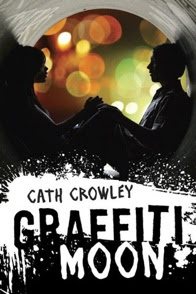 "Let me make it in time. Let me meet Shadow. The guy who paints in the dark. Paints birds trapped on brick walls and people lost in ghost forests. Paints guys with grass growing from their hearts and girls with buzzing lawn mowers."

It’s the end of Year 12. Lucy’s looking for Shadow, the graffiti artist everyone talks about.

His work is all over the city, but he is nowhere.

Ed, the last guy she wants to see at the moment, says he knows where to find him. He takes Lucy on an all-night search to places where Shadow’s thoughts about heartbreak and escape echo around the city walls.

Notable Quote
Most times when I looked over he wasn't drawing. He was leaning back in his chair and staring at me. And every time he stared I felt like I'd touched my tongue to the tip of a battery. I was nothing but tingle. After awhile the tingle turned to electricity, and when he asked me out my whole body amped to a level where technically I should have been dead. I was pretty sure we had nothing in common, but a girl doesn't think straight when she's that close to electrocution.

I love one-nighter books. I find them to be so exciting.  Nick & Norah's Infinite Playlist was one of the first YA books I read when I was out of the general YA-age, and I credit it to be one that cemented a love for the genre in me regardless of age.  Had Graffiti Moon been out at that time, it would have been the same to me, too.

Told in alternating chapters between Ed and Lucy, one of my favourite things about this book was getting different perspectives to the same events. I like alternating viewpoints in books anyway, and the fact that Cath Crowley would revisit the same scene only from the other's view was phenomenal. It really allows you to understand the characters and how the night plays out and why.

I also appreciated how Cath Crowley was able to discuss art and appreciate art without coming across pretentious - one of the hardest things in real life or in literature is to discuss a love for something without condescension or snobbery. And she was great with it, able to convey the pieces they were discussing and  show the characters' thoughts.

When I first spotlighted this in a WoW post, I talked a lot about street art and how I thought that would be a big appeal. Kind of a mistake, because it actually doesn't focus too much on that life. I mean, of course it does, but its more about the pieces Shadow created as well as the meaning of them and what each one conveys. Not about the "lifestyle." Not a bad thing or a particular good thing; just one to note if you have the same mindset going in.

I really loved this book. It was sweet and funny and Cath Crowley's writing is so fabulous and poetic. Lauren Oliver's got a lock on lyrical writing, and Cath Crowley definitely has that poetry feel: her imagery and emotions are spot-on and vivid - some of the paragraphs even felt like they had a certain cadence.  I've never been too great at deciphering poetry, but I loved that she included Poet/Leo's work as a part of the story. It was like sweet little extras to highlight a secondary relationship.

I do kind of agree with people that the ending was a bit...abrupt. I know it's the end of the night, it wraps up -- and I don't necessarily think it needed to be longer. It didn't need to be drawn out, there didn't need to be more than what it was. I loved how it ended, the words and everything. But still felt...abrupt.

I feel like the is one of the longest reviews I've written, and quite disjointed -- but I think it's because there were so many elements I really loved to this book. Even though it's a quick, short read that lasts a night, there's so much more to it. There's so much packed into this book, both in terms of the story and the writing, that I could probably still go on for paragraphs about it all. But I'll spare you, and finish it up by saying you should read this. You'll love it.

Posted by Ashley @ Ashley Loves Books at 1:35 AM