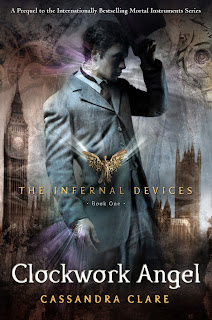 When sixteen-year-old Tessa Gray crosses the ocean to find her brother, her destination is England, the time is the reign of Queen Victoria, and something terrifying is waiting for her in London's Downworld, where vampires, warlocks and other supernatural folk stalk the gaslit streets. Only the Shadowhunters, warriors dedicated to ridding the world of demons, keep order amidst the chaos.

Kidnapped by the mysterious Dark Sisters, members of a secret organization called The Pandemonium Club, Tessa soon learns that she herself is a Downworlder with a rare ability: the power to transform, at will, into another person. What's more, the Magister, the shadowy figure who runs the Club, will stop at nothing to claim Tessa's power for his own.

Friendless and hunted, Tessa takes refuge with the Shadowhunters of the London Institute, who swear to find her brother if she will use her power to help them. She soon finds herself fascinated by--and torn between--two best friends: James, whose fragile beauty hides a deadly secret, and blue-eyed Will, whose caustic wit and volatile moods keep everyone in his life at arm's length...everyone, that is, but Tessa. As their search draws them deep into the heart of an arcane plot that threatens to destroy the Shadowhunters, Tessa realizes that she may need to choose between saving her brother and helping her new friends save the world...and that love may be the most dangerous magic of all.
--------------------Goodreads summary

Notable Quote
"You mean that I shouldn't wring my heart out over some boy who will never care for me--"
"No!" Sophie said. "There are worse things than that. It's all right to love someone who doesn't love you back, as long as they're worth you loving them. As long as they deserve it."

This is actually a re-read for me, because when I finally got Clockwork Prince in at the library and read the book jacket, I realized...I had no idea wtf was going on.  And that's probably a bad way to head into Book 2, right?  Therefore, I re-read Clockwork Angel.

I'm really, really glad I did, you guys. I'd read it the week it originally came out and hadn't thought about it since, so I was definitely rusty on what was going on. As I read, things came back to me of course; but I think I finally fully understand everything going on and better tracked who did what to who and why.

It is my firm belief that Cassie Clare can do no wrong. I've read all her books (except CP, obviously) and not a single one has ever disappointed me. True to form, this was filled with adventure and intrigue and heart-stopping action and that blood-curdling, breath-catching romance we yearn for. She is a master in incorporating romance flawlessly into paranormal - I mean, how is it possible she makes you fall in love with the mysterious Will while he is literally in the middle of fighting the Dark Sisters?!  Master, I tell you.

It's hard for me to say if someone could read this without reading The Mortal Instrument series before. Obviously you could, as it is its own stand-alone series -- but I think having that prior knowledge of the Shadowhunters and the En/Clave and Downworlders really helped with it. Since I had real Mortal Instruments before, I didn't notice if Cassie Clare did enough explaining in Clockwork Angel to fully develop the world for a new reader.  I'm fairly certain she did because I was ensconced in the world again, but I cannot say for sure.

Speaking of becoming ensconced into a world, anyone else just want to punch Nathaniel? I mean, seriously. Next in line would probably be Jessamine - Shadowhunter and freakishly scary parasol aside, she needs to step up.

You know, usually I can say who I want the main character to be with when it's a triangle situation. Even if I like both the men, I can almost always tell which one I'm really rooting for. But this one? I'm truly on the fence! We all want a bit of a Will in our lives, that mysterious dark-haired boy with secrets in his soul and the eyes that melt us and feel like they're seeing beyond the facades we put out there.  It's human nature (inexplicably, unfortunately) to want the Bad Boy.  But Jem was more of a creeping love for me: solid, and true, and so pure and steadfast. I definitely wanted Will in the beginning, but the last 200 or so pages...Jem became a serious contender. And now I have no idea which direction I want Tessa to go in.

As I sit here and debate about this though, it's just one more supporting reason why this book is fabulous: I'm debating the romantic fates of fictional characters! Cassie Clare creates this world that is so real and characters that are so fun and developed and interesting that I'm treating them like they're people I could call up tomorrow morning to hang out with in the Park (I so wish I could...).  I love the bits of humor, it's just one more delight to a plethora of them.