ARC Review: The Rules For Disappearing by Ashley Elston (ARC) 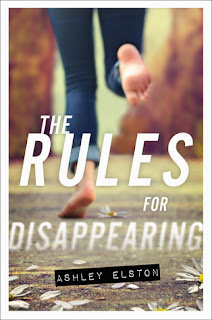 She’s been six different people in six different places: Madeline in Ohio, Isabelle in Missouri, Olivia in Kentucky . . . But now that she’s been transplanted to rural Louisiana, she has decided that this fake identity will be her last.

Witness Protection has taken nearly everything from her. But for now, they’ve given her a new name, Megan Rose Jones, and a horrible hair color. For the past eight months, Meg has begged her father to answer one question: What on earth did he do – or see – that landed them in this god-awful mess? Meg has just about had it with all the Suits’ rules — and her dad’s silence. If he won’t help, it’s time she got some answers for herself.

But Meg isn’t counting on Ethan Landry, an adorable Louisiana farm boy who’s too smart for his own good. He knows Meg is hiding something big. And it just might get both of them killed. As they embark on a perilous journey to free her family once and for all, Meg discovers that there’s only one rule that really matters — survival.
-----------Goodreads summary

Notable Quote
I spend the next two placements being a total bitch to every boy who showed any interest in me. I never wanted to feel guilty for deserting someone who cared about me like that again.

Funnily enough, when I started doing my usual after-reading bullet point list of things I remembered/noted/wanted to talk about in my review, almost everything that came out was a negative. I'm not even exaggerating when I tell you of the 7 bullet points I have, 5 are quite bad. And the positive ones are more like back-handed compliments than anything. And after alllll that, what do I write?
"Definite room for a sequel, and I would read that in a heartbeat."

How is this possible?! Oh books, how you toy with me.

When I first read about this book, I wasn't sure if I wanted to give it a shot. I mean, the premise is definitely intriguing, and there are so many ways a YA book dealing with witness protection could go! But at the same time, there are SO many ways this book could go, and I had serious doubts that any of those ways would be very appealing to me. And even though I apparently had complaints, I'm really glad I ignored my doubts on this!

The plot of the novel was interesting in that it wasn't quite what I was expecting, but wasn't completely from left field, either - it was perfectly plausible and, while not at all relatable to me, one I could still feel for the characters. I did think it was a little lacking in the action and tension; in the situations they all found themselves in, there could have definitely been a little more variation. A lot of it felt like the same kind (someone's behind me, someone's watching, someone's there, etc) - and there was opportunity for so much more here! Especially the end, where it all seemed to end abruptly in a 2-page explanation. (Ok, that's a bit of hyperbole, but you get my point.)

I was also a little annoyed with Meg. I get that she's struggling, she's got a tough time trying to take care of her sister and deal with an increasingly distant family, but some of the decisions she made were so stupid I wanted to reach through the pages and shake her. She had so much disrespect for the program, and while some of it is justifiable, a majority of it was ridiculous. Plus, after so many relocations, I thought she'd at least learn something from them! Alas, I was wrong.

The secondary characters were a toss up for me as well. I couldn't stand Emma and Ben - I found their personalities very lackluster and device-y to me. I hate characters who have obvious parts in stories, and that was definitely them. I also felt the mom was a bit of a weird storyline. I understand how her part was necessary and even likely given the predicament, but I felt it took the tragedy of the story just a little too far. At the same time, I love love LOVED Teeny and Pearl. They were such vivacious characters with colours behind them, and I almost wish I hadn't loved them so much because I started comparing everyone else to them. If the author can write such brilliant characters like them, why couldn't the rest of them be the same way?! It was frustrating, but I just wanted to hang out with Teeny and Pearl in the back of the pizza kitchen and chatter away with them. Laura and Elle were also characters I found myself liking, even though their part was small and, in my opinion, a bit overdramatic. There was a lot of secrecy as to why Anna felt betrayed by them, and I felt the hype was a little more than the reveal. Still, I like them, and I'm glad how they end up.

One of my favourite things about this novel was so small and seemingly unimportant that it's probably a bit weird, but I can't help it: Anna remembers all her relocations and all the identities she and her sister went through, and I loved that. It really brought a human side out of her, really helped me feel for her and how lost she must feel given all these different lies and lives she has to go along with. Especially the scene where she's going through them with Ethan - somehow, it really touched me, and quite honestly may be the entire reason I ended up feeling positive about this book!

While The Rules For Disappearing had several misses for me (obviously), I can't help but endorse the book! It was interesting and different from most of the books out there right now, and a pretty fresh take on mystery and intrigue in YA.