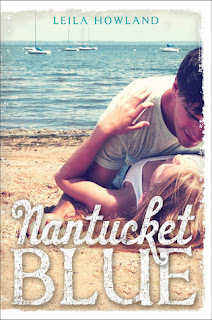 For Cricket Thompson, a summer like this one will change everything. A summer spent on Nantucket with her best friend, Jules Clayton, and the indomitable Clayton family. A summer when she’ll make the almost unattainable Jay Logan hers. A summer to surpass all dreams.

Some of this turns out to be true. Some of it doesn’t.

When Jules and her family suffer a devastating tragedy that forces the girls apart, Jules becomes a stranger whom Cricket wonders whether she ever really knew. And instead of lying on the beach working on her caramel-colored tan, Cricket is making beds and cleaning bathrooms to support herself in paradise for the summer.

But it’s the things Cricket hadn’t counted on--most of all, falling hard for someone who should be completely off-limits--that turn her dreams into an exhilarating, bittersweet reality.

A beautiful future is within her grasp, and Cricket must find the grace to embrace it. If she does, her life could be the perfect shade of Nantucket blue.
---------Goodreads summary

Notable Quote
I felt another kick of sadness, right in the stomach. I was realizing that loss has a kind of violence to it.

San Diego had a fantastic bout of weather recently; even though it was early March, the entire week was in the high-70s to mid-80s, and it was absolutely glorious. And it was the perfect time to read Nantucket Blue, because it made me yearn for beachside reads, romps in the ocean and bonfires below a star-speckled sky.

Nantucket Blue follows Cricket as she heads to Nantucket for her summer in order to follow and be there for Jules, her best friend, whose family suffered a devastating tragedy. But Jules turns into someone Cricket barely recognizes, and she's left to make her summer into more than a support system.

I was a little surprised at how sad this entire book is. I mean, I know it starts with a horrible tragedy, and of course I expect that to permeate a lot of the thoughts and actions throughout. But there was a small line of sadness that seemed to snake through all the words, all the thoughts, and it was a little startling that I'd be laughing with Cricket and Zack and still feel a little morose. I'm not saying this is a depressing, ugly cry book, not at all; but there's always something lurking behind the blue ocean.

Can I say how little I liked Cricket and Jules? Jules especially - I just didn't understand her character. yes, I get why she acts the way she is, but I never got the sense she was a great friend anyway. In the memories she was fine, but nothing worthy of how much Cricket is willing to do for her. As for Cricket, she was so slow on the uptake that I was entirely too frustrated with her the entire novel. There were so many different instances I wanted to yell at her to get there quicker, that she was missing vital parts and only seeing such a small version. I know that's often how it is in real life, but some things were unforgivable to me. Perhaps the only element I liked with Cricket was the romance she was struggling with - which is weird, since I wasn't a fan of the boy she was with. He was sweet, but his entire plotline was very formulaic to me. I didn't get the chemistry between the two. Cricket's thoughts and feelings towards him though were the most real part about her, and one I enjoyed seeing on the page.

Something I did love? The Cranberry Inn where Cricket starts to work and everyone that came out of there! I absolutely adored George, Gavin and Liz; enough where they made this entire story worth it for me. They were such fantastically developed, completely unique characters and I wanted nothing more than to check into the Inn and join them. They have such distinct voices and interactions, I wish I knew them in real life.

And not surprisingly after declaring how little I liked the main characters and how much I liked the secondary ones - my favourite part to this entire novel was the secondary storyline! I can't say much about it since it's not in the synopsis, but there's an underlying plot that intertwines a little with the main one, and I love it. It's such a fun story to learn about and read along to, and I liked how we slowly get varying perspectives. Perhaps it's the journalist in me that liked to go deeper into the history and find out the stories behind others; whatever it was, I found myself flipping past Cricket's dramas to get to the work she was doing.

I have to note though, I really liked Leila Howard's writing. I can't quite pinpoint what it is specifically, but I was very attracted to her words and structures. There's something very relatable about her words, and that was a treat.

Nantucket Blue had several misses for me, but completely made up for it with secondary characters and storylines. Though it is a sweet, summery novel about defining yourself without others, I found the background to shine much brighter. And even though that's frustrating sometimes, I am completely content to look at the scenery more than the play.