Review: How Zoe Made Her Dreams (Mostly) Come True by Sarah Strohmeyer (ARC) 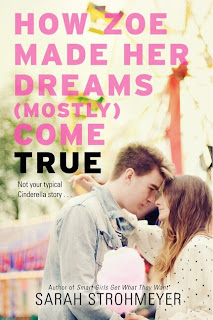 From Sarah Strohmeyer, author of Smart Girls Get What They Want, comes this romantic comedy about one girl's summer job from hell. Think The Devil Wears Prada set in Disney World.

When cousins Zoe and Jess land summer internships at the Fairyland Kingdom theme park, they are sure they've hit the jackpot. With perks like hot Abercrombie-like Prince Charmings and a chance to win the coveted $25,000 Dream & Do grant, what more could a girl want?

Once Zoe arrives, however, she's assigned to serve "The Queen"-Fairyland's boss from hell. From spoon-feeding her evil lapdog caviar, to fetching midnight sleeping tonics, Zoe fears she might not have what it takes to survive the summer, much less win the money.

Soon backstabbing interns, a runaway Cinderella, and cutthroat competition make Zoe's job more like a nightmare than a fairy tale. What will happen when Zoe is forced to choose between serving The Queen and saving the prince of her dreams?
------------------------------Goodreads summary

Notable Quote
"The heart is a clever trickster that delights in playing the brain for a fool."

Here’s my pitch for How Zoe Made Her Dreams (Mostly) Come True: if you have ever wanted a teenage version of The Devil Wears Prada, this is it. There’s a fantastic “villain” (who is more than she seems), a struggling MC that you root for (who is more than she seems), and a cute boy standing alongside silently supporting (who is also more than he seems). There’s a best friend you want as your friend, a few evil characters you love to hate, and a great little story that makes you laugh – and of course, they’re all more than they really seem. In the best way.

The premise of How Zoe has to be one of the most fun I’ve ever run into, and also one of the ones I want to say I absolutely wish I was a part of! How much fun would it be to live with a bunch of other interns at an adventure park?! I mean, I know it’s quite dorm-like, but that would be awesome. All day dancing and entertaining, then spending the off-hours hanging out with friends. Sure, I know it’s all hard work and not all of it will be funtimes, but hey – it has to be more fun than not! Especially if it were Disneyland.

But Disneyland this is not, because Fairyland and its older Storytown history were fantastically made on their own. I’m a HUGE Disney advocate (I had an annual pass for 5+ years!), and if there’s anything I can appreciate, it’s a fantastic theme park that lets you find your inner child. Even though How Zoe was a lot of the underbelly to a theme park, I could still find the fun in it and really get lost in all the hullaballoo. Especially that parade!

I really liked the characters in this book. None of them were favourites or too stand-out, but they’re all solidly lovable. There’s some good in all of them, a little bad in all of them, and real heart everywhere. Each is painted so clearly. Zoe is a great main character, with that quiet eagerness every reader can find themselves in. Jess is the best friend you always wanted: loyal, sweet and with her own little seal. Ian and Dash are fantastic boys, especially since you can’t really tell who you should love - at least, I couldn’t! I had my ideas, and of course I had my choice, but there was enough to make me doubt consistently until the end.

Speaking of the end, that was probably my only real problem with this book. And it’s not even really a problem! It’s just that it kind of feels like a cop-out, even though it makes complete sense and there’s really no other way I would want it to end. Still, there was just a little nagging thought at the back of my head that was like “Oh. Ok, I guess.”

But the best part? All the little touches and details. Like how they refer to that park as the Mouse, the ridiculous requests of the Queen, how the initials for Her Royal Majesty was just a little more, the fun little nicknames of each one…they’re small parts, but they’re great and together it all comes together to make the book that much better.

If you ever want a light, fun and totally worthwhile read, turn to Sarah Strohmeyer. Last year when I read Smart Girls Get What They Want, I was pleasantly surprised at how strong and brilliant it was. There were facets to the characters I never expected, and it made me fall in love with the book and the writing. While I don’t think How Zoe Made Her Dreams (Mostly) Come True is as strong, it is undeniable that Sarah Strohmeyer has a real talent for fun contemporaries.