Review: How I Lost You by Janet Gurtler (ARC) 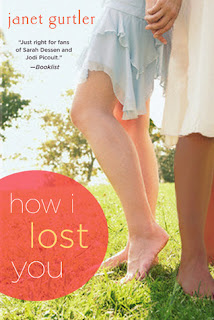 How I Lost You by Janet Gurtler
Sourcebooks, 320 Pages
Expected US Release Date: April 23, 2013
Format/Source: Print ARC from Around the World ARC Tours - thank you!
Challenges: SARC, Contemporary Challenge

There are a few things Grace Anderson knows for sure. One is that nothing will ever come between her and her best friend, Kya Kessler. They have a pact. Buds Before Studs. Sisters Before Misters. But in the summer before senior year, life throws out challenges they never expected. And suddenly the person who's always been there starts to need the favor returned. Grace and Kya are forced to question how much a best friend can forgive. And the answer is not what they expected.
----------------------Goodreads summary

Notable Quote
He didn't understand that sometimes circumstances could sprout up a lot of grey. Bad things sometimes tarnished people's souls. Kya had stains. There were some things she couldn't get over. It wasn't always black and white.

Janet Gurtler is one of those YA authors I’ve heard tons about since she has so many books that people I know love, but I’ve never read anything by her! When I had the chance to read How I Lost You, I was really excited heading in – it sounded like a fantastic contemporary, and I couldn’t wait to be introduced to her writing. And now, after? Even though I had a few problems with How I Lost You, I totally get why so many people love her books and I can’t wait to read the rest!

How I Lost You was a strange read for me because even though I can’t connect to any situation at all that Kya and Grace were going through, I totally relate to the emotions and fears that were there. Most readers know what it’s like to make excuses for a friend, to cling to what you were and know you can be even though what you are doesn’t quite measure up. Every instance of friendship and all the struggles in this book were so real, it almost hurt me to see it right there.

In terms of the characters though, I have to say that I really couldn’t stand Kya. I thought she was a terrible person, a terrible friend, and while I know she’s supposed to be, there was absolutely nothing redeeming about her that made me feel an ounce of sympathy. But what I couldn’t stand with Kya, I really loved in Levi! He wasn’t the typical male jock/tough guy out there. He wasn’t wussy or stereotypically sensitive, but there were soft sides to him that really rounded out a fresh character. He was outspoken but still shy, a personality all on his own.

An element I was totally surprised by was James, the third best friend! When you read the synopsis, there’s not an inlking of him existing to Kya and Grace – but I’m really glad he did. It was a bit odd since he didn’t quite fit into their whole “Buds Before Studs” mentality, but I liked the history he gave them. And even though I do think he had a bit of an obvious, formulaic purpose, I still thought he was a great character and much more the friend that Grace deserved.

I have to say, I was surprised at how detailed Janet Gurtler’s writing was! She writes scenes down to the detail, saying line-by-line what is happening. Sometimes it was awesome and really let me feel like I was there in the scene (like at the big dinner); and sometimes it was just too much and all I could think was how little I cared to read about them going through their paintball gear in the trunk. Still, it was interesting, and overall I quite liked that.

Even though there were quite a few elements to How I Lost You that I didn’t quite like, how much I could really feel the story spoke volumes to me. There’s an honesty and a realness that made this completely worthwhile.