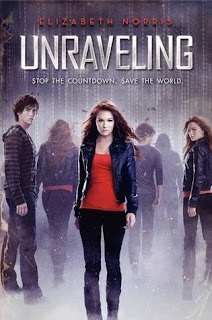 Two days before the start of her junior year, seventeen-year-old Janelle Tenner is hit by a pickup truck and killed--as in blinding light, scenes of her life flashing before her, and then nothing. Except the next thing she knows, she's opening her eyes to find Ben Michaels, a loner from her high school whom Janelle has never talked to, leaning over her. And even though it isn't possible, she knows--with every fiber of her being--that Ben has somehow brought her back to life.

But her revival, and Ben's possible role in it, is only the first of the puzzles that Janelle must solve. While snooping in her FBI agent father's files for clues about her accident, she uncovers a clock that seems to be counting down to something--but to what? And when someone close to Janelle is killed, she can no longer deny what's right in front of her: Everything that's happened--the accident, the murder, the countdown clock, Ben's sudden appearance in her life--points to the end of life as she knows it. And as the clock ticks down, she realizes that if she wants to put a stop to the end of the world, she's going to need to uncover Ben's secrets--and keep from falling in love with him in the process.

From debut author Elizabeth Norris comes this shattering novel of one girl's fight to save herself, her world, and the boy she never saw coming.
---------------Goodreads summary

Notable Quote
"It's just..." He sighs. "I don't always make the right decisions, and I get that." He shrugs. "But at the end of the day, I want to be able to look myself in the eyes and say I believe in them. I want to know I'd make each one again.

Did you know Liz originally wrote this as a stand-alone?! I suppose you'd have to have already read the novel to understand why I'm so indignant, but trust me when I say this ending? THAT IS NOT AN END. No. As Dan Krokos said at the event I went to for him and Liz: "It is a great ending!...FOR A BOOK ONE."

This book was so much more than I expected you guys! Honestly, I wasn't sure going in, because I had so many questions! Is this a reincarnated-type thing? Maybe a strange come-back-from-the-dead-are-you-really-alive thing? What is this countdown? It made me nervous that I had pretty much no idea what I was in for, and I am ashamed that I let that intimidate me. Especially because all that worry was for nothing! Unraveling was a phenomenal read, filled with something for everyone. There's a bit of paranormal in there what with the whole boy-brings-you-back-to-life-LITERALLY thing, but it evolves into so much more. This is for the science nerds and sci-fi geeks, for contemporary lovers and people who can really feel for characters.

I'm not usually one for science-y things - black holes and wormholes and time warps and all that jazz kinda goes over my head. But Elizabeth Norris handles it all flawlessly, explaining in such a fascinating way that I completely understood everything AND was totally into it! I was reading all I could as fast as I could, and that means something if I'm reading science crap!

Something I wasn't really expecting? The deaths! We know someone close to the main character dies, and it's important. I was guessing who it would be, and then...and when...and THEN that person...oh you guys. It was absolutely heart-wrenching and I may have shed a tear or two or nine when a few of the deaths happened. It's shocking how fast you fall for everyone in the book.

Which leads me to chat about Ben, the main interest and boy who revives Janelle. Ohhh boy. I may love him a little bit. Or a lot a bit. He's probably the closest character I've ever read to someone who I would actually fall for in real life. He's a bit broken and secretive and he's not always right or doing the right things. But he's got conviction and heart and is filled with such thoughtfulness and consideration that I wanted to reach through the pages and yank him out and hug him.

One of my favourite elements was probably the relationships - not the romantic ones, but the friendships and the family relationships. Janelle's mom has issues, but the love Janelle has for her brother and dad was so strong, it absolutely emanated from the pages. And even though I have professed my love for Ben, I was totally taken with Janelle's best friend Alex, too. He so reminds me of a bunch of people I know, and I love it. They've got a great friendship going too, one that's not perfect but completely relatable and real. As does Ben with his friends, Elijah and Reid. Even though the trio frustrated the crap out of me sometimes, they were so distinct and made a great group.

Does it seem like I'm talking about a lot of different things? I know I am. There is a lot going on in this book; and while all of it is riveting and it's actually pretty easy to follow, I definitely had to stop and think for a few seconds to remember what plot point we were following. It's a hefty page count, and rightfully so - there's so much packed into it!

Something I loved? It's set in San Diego! Janelle dies at Torrey Pines beach, which was the one my friends and I went to all the time in high school! And an earthquake absolutely crushes a bunch of the freeways, all of which I totally went on today! I love when books are set in my city - not just because it's really fun, but it makes it that much more real for me. I know these streets, and I loved that Elizabeth stuck to real locations and was completely accurate with it all. I felt like I was going around these suburbs and neighborhoods. Especially Pacific Beach, where Ben's bike shop is - I used to work there and know that part of town increeeedibly well. If you've read the book, trust me when I say that everything Elizabeth said about PB? Totally, 100% true. Old and leathery has-beens, y'all.

I'm really glad Sierra pushed me to read this, you guys - it was fantastic and filled with crazy adventures, crush-worthy boys, and a storyline worth all the thought put into it. I cannot freakin' wait for Unbreakable, the (thankful!) second book in the series. Not just because I want more Ben in my life, but because I'm so fascinated with the setting and situation Elizabeth has cooked up! I want to know more!