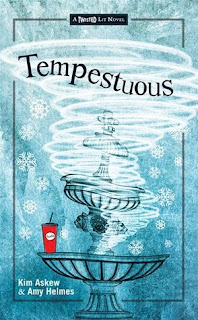 Recently banished, unfairly, by the school’s popular crowd, former “it girl,” Miranda Prospero, finds herself in a brave new world: holding dominion amongst a rag-tag crew of geeks and misfits where she works at the Hot-Dog Kabob in the food court of her local mall. When the worst winter storm of the season causes mall workers and last-minute shoppers to be snowed-in for the night, Miranda seizes the opportunity to get revenge against the catty clique behind her social exile. With help from her delightfully dweeby coworker, Ariel, and a sullen loner named Caleb who works at the mall’s nearby gaming and magic shop, Miranda uses charm and trickery to set things to right during this spirited take on Shakespeare’s The Tempest.
------------------------Goodreads summary

Notable Quote
The peculiar thing about courage is that you ca more readily summon it forth when something (or someone?) you love is at stake.

Has anyone ever seen the movie She's the Man, with Channing Tatum and Amanda Bynes? Let it be known that that is one of my favourite movies OF ALL TIME. I love it. It's hilarious and so perfectly a spoof on Twelfth Night by Shakespeare.

Tempestuous is just like that (though obviously a farce on The Tempest): funny and awesome and a little bit ridiculous but wholly enjoyable. I laughed out loud for real at a lot of parts.

I read The Tempest in my second year of college (a whoooooole long eon ago, in 2006), and while I remember enjoying it, it was not even close to being a favourite Shakespeare of mine; subsequently, the story is fuzzy at best in my memory. While reading this book, a lot of it came back to me, but not enough for me to claim that I can compare them with any justice. Tempestuous felt reminiscent, but not like a retelling for me. Not a judgment, just a statement.

Here's where the judgment is: maybe I'm simply not up on farces, but Tempestuous felt just a little too over the top for me. I get books that are lark and spirited takes, but this one had a lot of moments where I rolled my eyes. They're all fun, but it started to cross over into not being believable. Miranda is quick and witty, but it's just a little too convenient or well-thought out when it's supposed to be on the fly or in a high-pressure situation. Maybe that won't bother other people, but I find it distracting when I'm constantly shaking my head and thinking "that wouldn't happen." The writing itself fit that tone really well; which for me was way over-the-top, throwing around big words and fancy alliteratives. Oddly though, I kind of appreciated that the writing fit the mood of the book - even though it bugged me overall, it would have been far less of a novel if they were to oppose one another.

What's the most telling thing to me is that I read this book November 18, but I'm not writing the review until mid-December - and truthfully? I don't remember a lot of it. I remember my feelings as I was reading, but not many of the details or finer parts of the novel. I know I liked Caleb and thought he was a great match for Miranda's antics and superiority. I remember loving little Ariel, the second-in-command. She was so much fun and so bubbly that I felt like she was bouncing right off the page at me. But even now as I picked up the book to skim, I found myself going "oh yeah! that happened!"

It sounds like I'm being only negative, I know. But I think it just wasn't a great fit for me. The one thing that I did really love though is the creativity! Retellings of stories, and one as lofty as Shakespeare, are always so difficult. But Tempestuous was fun and totally lived up to it being a modern-day version! All the different schemes Kim and Amy cooked up for Miranda to enact were hilarious and unique; even the original reason why Miranda was put into "fast food servitude" was creative. I can definitely say that I've never read anything quite like this book, and that is a very, very good thing.