Review: The Girl in the Wall by Daphne Benedis-Grab 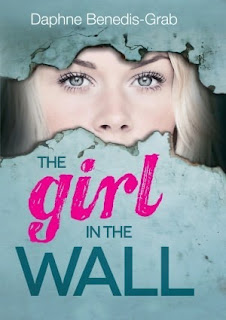 Ariel's birthday weekend looks to be the event of the season, with a private concert by rock star Hudson Winters on the grounds of her family's east coast estate, and all of Ariel's elite prep school friends in attendance. The only person who's dreading the party is Sera, Ariel's former best friend, whose father is forcing her to go. Sera has been the school pariah since she betrayed Ariel, and she now avoids Ariel and their former friends. Thrown together, Ariel and Sera can agree on one thing: this could be one very long night.

They have no idea just how right they are.

Only moments after the concert begins and the lights go down, thugs open fire on parents and schoolmates alike, in a plot against Ariel's father that quickly spins out of control. As the entire party is taken hostage, the girls are forced apart. Ariel escapes into the hidden tunnels in the family mansion, where she and Sera played as children. Only Sera, who forges an unlikely alliance with Hudson Winters, knows where her friend could be. As the industrial terrorist plot unravels and the death toll climbs, Ariel and Sera must recall the sisterhood that once sustained them as they try to save themselves and each other on the longest night of their lives.
-------------------Goodreads summary

Notable Quote
...but now I look it over, just in case there's anything in there that could cause damage. But books aren't dangerous enough, not unless you sit down and read some of them.

I don't know what exactly I was expecting when I went into this book, but it was nothing like I ever thought it would be! And that's a good thing, trust me. There is so much suspense and heart-stopping moments that I was tearing through the pages wondering what was going to happen and who was going to make it out alive.

I am going to get the bads out of the way though - more so I can quickly get it over with, but also so I can get to the goods! I'm not a fan of the title. I find it reminiscent of Anne Frank (and it is nothing like that), and I don't find it to be representative of the great content within this. I'm also a bit torn about the actual writing - there were several moments I found myself stopping and re-reading, because there was something a bit off about the flow. A lot of the elements felt a bit contrived or convenient, and I even have a note where it says "interesting, but feels forced. Not smooth." Lastly, I hated the drama between Sera and the classmates; while I can understand why what Sera did would make her a social pariah, I struggle to believe it would make her classmates hate her so much they'd flat sell her out to the Agents keeping them hostage and shooting people on whims. It was just a bit of a stretch, and I didn't like it.

As weird and horrible and gross as this sounds (and I swear I'm not a violent person), one of my favourite things was how fast the bodies piled up here! YA never really has much death in it - at least not meaningless deaths. Usually a death is a main point, a catalyst to a story or emotion or journey. Not so in The Girl in the Wall - people are droppin' like FLIES, and just because the head Agent (who they call The Executioner) feels like it. Sure he uses it to make a point too, but there are bullets everywhere, and frankly: it's kinda cool to see that in a YA novel*. And I don't mean to say The Executioner is killing people just to kill - there is a purpose to each person he shoots - but I like that the author is unafraid of using murder and bullets in a story. It's a whole new element of keeping reader's on their toes, and it actually made me care for the characters more! When they could die at any moment the page turns, it just flips your compassion switch to on.

I liked the boys in this novel a lot, which is kinda funny since it revolves around two girls and their friendship. Even so, the guys are very worthy secondary characters. Hudson is every bit the caring rocker boy we all want to have and want to love, and I like that he was actually someone to which I could relate. Nico was also someone we want to fall in love with, very knight in shining armor - some of which was cheesy, but what he does for Ariel far outweighs any of the eye-rolling I might have done towards him. And what happens to him in the end? I won't give it away but...oh goodness. OH. GOODNESS. Even the smaller male characters (all the good ones, not The Agents) were done really well, each very distinct and very, very human.

Actually "human" is a good way to put this novel - while of course I've never actually been in this situation (saying prayers of gratitude right now...), what each character feels and how they each react feels very real to me. There's a lot of variation to the emotions in each person, and there was a lot of care and consideration into those details - something I appreciated very much. That was actually probably the reason I was so invested in the story: it feels like I'm watching a real news story, that this was actually happening somewhere.

Oddly, Sera and Ariel didn't affect me much. That's not to say they're bad characters, not at all; for some reason, they just never resonated with me. Of course I care what happens to them, and I like that there is still an innate trust and care between them no matter the recent drama. But they were more characters to watch for me, rather than people to feel for.

The Girl in the Wall was a bit up and down for me, but the ups are SO far up that I'm glad to have read it!