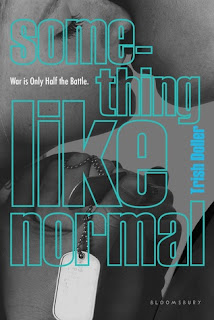 When Travis returns home from a stint in Afghanistan, his parents are splitting up, his brother’s stolen his girlfriend and his car, and he’s haunted by nightmares of his best friend’s death. It’s not until Travis runs into Harper, a girl he’s had a rocky relationship with since middle school, that life actually starts looking up. And as he and Harper see more of each other, he begins to pick his way through the minefield of family problems and post-traumatic stress to the possibility of a life that might resemble normal again. Travis’s dry sense of humor, and incredible sense of honor, make him an irresistible and eminently lovable hero.
---------------------Goodreads summary

Notable Quote
I can't tell them the things they really want to know. How it feels to kill someone. It's different for everyone, but I felt a rush of adrenaline. A fleeting triumph. And later, in the night when it was quiet, the guilt hit like a sucker punch. Because, even though he was trying to kill me, I'd taken someone's life. These are things I've tried to leave in Afghanistan. Otherwise, how am I ever going to live with myself?

I'm going to get all this out of the way at the very beginning. And if I say it quick, maybe it'll hurt less. A very close childhood friend was killed in Iraq on December 13, 2005 by a roadside bomb. It wrecked his humvee and killed him and one other in his platoon. He was like a brother to me as a child, and I miss him every day. In college, a boy I was very close with and meant a lot to me was deployed suddenly to Iraq and Afghanistan - he's fine, home and retired from the Army now, but the fear and worry as I watched him leave, endure, and return linger, and the memories don't fade. One of my best friend's brother went through 2 tours in Iraq and Afghanistan, and returned without his best friend. As I type, I have 3 friends who are currently in Afghanistan, and I worry about them constantly and consistently.

Something Like Normal was not an easy book for me to read because every thought Travis had, every story he recounted and emotion he went through was projected onto someone I know personally. Charlie could have been my childhood friend, Travis could have been my best friend's brother, memories of nights spent in trenches and crappy food are what my friends are going through right now. If you follow me on Twitter, you know I had a hard time. I had to put it down twice because I started crying too hard, getting majorly overwhelmed with sadness and/or emotions. I finally set aside a day where I was ready to break down, have a good cry and fall in love with Travis and the rest of this story.

And let me tell you, all of it was entirely worth it. Beyond worth it.

A few people told me maybe I shouldn't read it if it was wrecking me too much - and I concede that maybe that would have been easier. But I loved the premise, and the fact that I could relate to this so much was a driving reason why I wanted to read it. That's one of the reasons why I love books; to connect, to feel and find myself in every page. There were also a few who told me to try not to get so personally attached to it; to which I say 1) that's also big reason why I read it, and 2) WAY easier said than done. If someone told you his personal account of moving through trenches while bombs were going off behind him, bullets were soaring towards him, and how he experienced auditory silence because of it...that's not something you can just disconnect from.

From strictly a reader's point of view, this book is absolutely amazing. Travis is such a strong character with an even stronger voice that just leaps off the pages. Half the day I think I may run into him at the grocery store he's so real. Harper is equally as strong, the perfect woman to take on Travis and all his issues. I loved their relationship together and how they slowly grow to trust each other and have this amazing give-and-take between them. Each secondary character is also done so well, making you love or hate them for very direct and dimensional reasons. Every person has their own unique and nuanced personality, no matter if it's being discussed the entire book, three chapters, or half a page.

The story itself is also phenomenal; sad and happy and difficult and raw, with real emotions and struggles. Kimberly Sabatini (hi Kim!) said in her review of it on Goodreads that this book had "endless depth and layers," which is just the PERFECT way to describe it. Everything Travis has to deal with just made my insides hurt for him, from family problems to reacclimatizing to "normal" life, to the death of his best friend right in front of his eyes. His PTSD was terrifying and made my heart hurt for him, written so thoroughly and well that I just want to hug every soldier I see in the hopes to ease any lingering effects. Travis's struggle with admitting it and then what to do with his nightmares was so heart wrenching; and I have to say that one of my favourite things was his struggle with it because of how it may affect his career with the Marines. Dealing with it is an emotional issue, but I rarely see the truth of how it would be viewed in the military and with other soldiers mentioned. I quite loved the mention/use of photos within the plot too - a perfect example of how what's photographed and printed about War may not be quite what it's framed to be.

I can't not mention Trish Doller's writing, too - it's so strong and fabulous. There's just the right amount of detail to break your heart or make you fall in love all over again; I seriously had a breakdown reading the line "Rock-paper-scissors was the way we decided everything, and it's only now I realize Charlie almost always thew rock." - because after all we know about Travis, Charlie and their relationship, it just struck me as so wonderfully heartbreaking. How she wrote his life, Travis's thoughts, the memories and struggles...it all feels so REAL. It flows perfectly, and I flew through the pages.

As someone who read this book with so many personal ties, I fell in love, shed tears, and wondered how someone could get everything on the pages so right. Every emotion was spot on, from Travis's mom worrying, to the stress of why someone enlisted, to making life work when someone is gone, to figuring out how to mesh Past Life with Enlisted Life and Future...it's brilliant. While I myself am not in the Marines so my own experiences can only extend so far, I recognize a lot of things told to me from friends, soldiers and others who went through or are going through this. I want to give this book to everyone: military men to know they're not alone, friends with military friends so they know what they may face, anyone who's ever seen a soldier so they can just understand. Even someone who has no ties, no experience, no ANYTHING to do with this should read it, because it's just that beautiful.

This is probably the longest review I've ever written, and there are still SO many things I want to say. Every time I try to end it, I think of something else I want to talk about! While I will spare your reading eyes, just trust me when I say this book will take you through one of the rawest, roughest journeys in contemporary YA today - and you will feel so grateful to have experienced it. The story works its way through your heart and soul, leaving little touches everywhere - and I feel so lucky to have it with me.

There will never be enough medals for this book, but the best I can do is stars:
5 Stars / 5

PS. As an aside, I want to thank Trish for being such a wonderful person; she saw the struggle I was having with it on Twitter and was absolutely incredible about it. I mean, she told me to stop reading if it was triggering too many things! Not only does that mean she really understands the subject matter of her book, but you have to be a commendable person at heart to be an author telling a reader not to read her book. Few people have that much care and compassion, and I'm grateful Trish is one of them. Ms. Doller, you have my endless support.

*I was given an eARC from NetGalley, but my iPad decided not to cooperate ~40 pages in. Luckily, almost directly after that the wonderful Kimberly Sabatini had a contest for her ARC and I won - so I finished out the novel from the ARC. Sorry for confusion, but big thanks to Kim, NetGalley and Bloomsbury!
Posted by Ashley @ Ashley Loves Books at 10:00 PM