Review: Smart Girls Get What They Want by Sarah Strohmeyer (ARC) 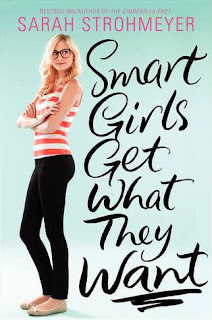 Gigi, Bea, and Neerja are best friends and total overachievers. Even if they aren’t the most popular girls in school, they aren’t too worried. They know their real lives will begin once they get to their Ivy League colleges. There will be ivy, and there will be cute guys in the libraries (hopefully with English accents)! But when an unexpected event shows them they’re missing out on the full high school experience, it’s time to come out of the honors lounge and into the spotlight. They make a pact: They will each take on their greatest challenge—and they will totally rock it.

Gigi decides to run for student rep, but she’ll have to get over her fear of public speaking—and go head-to-head with gorgeous California Will. Bea used to be one of the best skiers around, until she was derailed. It could be time for her to take the plunge again. And Neerja loves the drama club but always stayed behind the scenes—until now.

These friends are determined to show that smart girls get what they want—but that could mean getting way more attention than they ever bargained for....
----------------------Goodreads summary

Notable Quote
I searched for my favorite authors, women I have trusted to reassure me that not all teenage guys are total ditwads, that the archetype of the noble cute hero who devotes himself to the girl he loves has not gone the way of the rotary phone. That all I had to do was be myself (smart, hardworking, funny) and be patient and kind and he and I would find each other.
As Bea would say, this is why they call it fiction.

You guys. I think this is the CUTEST book I've read this year. And I was not expecting that! I definitely wanted to read it, but I had some reservations about the take on "smart girls" and just didn't really think it would be on the top of my list. But I was so wrong! I thoroughly enjoyed this entire story, from the characters to the hilarious and meaningful moments they find themselves in. This is a fun, funny and quietly strong novel about friendship, boys, and being who you are.

As I say in a lot of books, this was minorly predictable. Pretty much from page 20 I could tell where things would go and who would end up with whom -- but that didn't even really bother me in the end because I enjoyed how they all get there so immensely! It was like a little game, trying to figure out how the character would get from Point A to presumed Point B and figuring out if I was right. Probably a good 99% I was, but it was still all in good fun.

I loved the friendship between Gigi, Bea and Neerja - it reminded me a lot of me and my group of friends. Their dynamic is fun and supportive, but still remaining realistic with some problems and issues with each other; especially the parts about one girl being left out since the other two have boys (...sigh). You never doubt the girls' strong relationship with each other, and I loved getting to see that in a YA book.

Handling the perception of "smart girls" was also done really well; a lot of times writers will over-exaggerate intelligence in a character to emphasize s/he has it, but definitely not so in this. Each girl is obviously smart, but not in a way that makes the reader feel stupid or resentful towards them. I appreciated that the author made her characters actually put effort into being smart, too; they still did homework, they discussed learning devices and tests and studying. It wasn't just assumed they were smart; you could see they worked for it.

Everything felt nice and real and normal in this book. So many books portray the smartest girls in the grades as outcasts, nerds, never spoken to or sneered at by jocks and popular people. I have to assume that's real in some schools, but it never was for me; my school was massive, we just didn't care to have those types of barriers. I loved that even though these girls were honors students, top of their class, people of all different high school "factions" talked to them. They had other friends, interactions with those outside of their group, boy drama and lives. The characters were well-rounded and had interests beyond a 4.5 GPA.

I did think Gigi was a bit slow on the uptake, though maybe it's her character since most of those places had to do with relationships with other people and human interaction. Definite moments I just rolled my eyes and thought just hurry up and read, she'll get there eventually geez. And while I loved the character of Mike and how he's got some great depth to him, I do think he's a bit too perfect. Sure he has his flaws a few times (very little times), but they're just a bit too perfectly placed and convenient. But I would still date in him real life in less than a heartbeat!

CHARACTER SPOILER COMING UP! DON'T READ HERE IF YOU DON'T WANT TO KNOW! SKIP TO AFTER THE ANNOYING CAPS! YOU'VE BEEN WARNED!
Will is such a piece of shit! I had that nagging feeling that he always was throughout the novel, and as his character keeps going, I just wanted to kick him in the balls so much more. What an asshole. I write notes as I read, and my note on him is literally: "UGH. WILL. BOO." However! I do think he's written very well! I know boys who are just like him (unfortunately), and I did question a few times what he was really like. I totally loved him when he first came in, too. I just wish he hadn't been from California =/
CHARACTER SPOILER OVER! YOU CAN READ AGAIN :)

What I was most surprised about was the clear message that came across: be yourself. Don't change for anyone. The girls each go through wanting to make their high school experience enjoyable, but they still work within parameters that are usual to themselves. They take risks and do things that scare them, but they never change from who they are. Even though others try to make them, or sometimes they might just a little, it always ends up at that wonderful message of figuring out what's real and what isn't. I love that, and think any teen should have a gentle reminder.

I'm not joking when I tell you I finished this book smiling. The entire story is filled with adorable moments, cute swoon-worthy romances (multiple!), and a wonderful little message wrapped around it all. Sure, maybe it's predictable, and Gigi needs to think a little (for being so smart, she can sure be dumb...definitely applies here!), and Mike may be a bit too perfect, and I want to kick a character in the shins...the fact is, I loved it all.