Sooo I suck and forgot to take pictures when I was there - I know, I'm sorry! I was disappointed too. But I forgot because I was laughing too hard!

The Fierce Reads tour stop came to San Diego on June 6. We were lucky to not only have Anna Banks, Leigh Bardugo, Jennifer Bosworth and Emmy Laybourne present, but also Jessica Brody and Marissa Meyer! I'd only read Struck and Cinder before the tour, but all the books have been getting rave reviews and it was exciting to hear them speak about each one.
They showed the Tour Trailer and the book trailers (their names above link to each trailer!), with each author introducing and giving the inspiration behind their book after the trailer. They then opened up for questions and finished with a massive signing and swag spree.

The usual bullet point recap! (It's long this time since there were six authors to cover! You should see my notes, super scribbled and I had to make symbols for each author for shorthand.)


This group of authors is probably the funniest I've ever seen, because they each have their own little brand of dry, sarcastic humor - and it's very unassuming! They're all really well spoken (seriously - my note on Emmy Laybourne was 'strong, confident voice') and clear, it was awesome to hear them. They've all got their own version of humor.

Also, anyone else agree this is possibly the most attractive tour group ever?! Because damn, yo.

And of course, they are awesome and signed everything that was asked of them. I'm constantly grateful and amazed at authors for the patience and smiles they have for us readers.

And the swag! I know it's a ton, but I grabbed two extras of most because of a future giveaway - two lucky people will get these plus more! 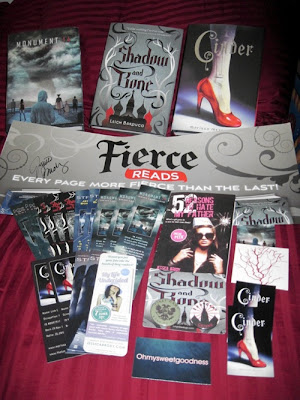 This was also an AWESOME event for me as a blogger because I finally got to see and meet other bloggers!
> Sierra from Yearning To Read.
> Natasha.
> Jamie from The Lost Lola - awesome to meet her, but so short :( It's ok, next time we shall chat! (Also, you should check out her awesome post of fashion from Masque of the Red Death. So cool!)
> Lisa Cannon, from YA Know and I'm certain a future author!
> Andrea, Debra and Nikki, who I met at the YA or Bust signing a few months ago - I was a little nervous they wouldn't remember me, but it was a useless worry because they were just as friendly and fantastic as I remember.
> Jon Yang (maybe you've read his book Exclusively Chloe?), who is actually an author/blogger I've "e-known" for years - before I even had a book blog! It's rare for me to meet anyone who knows about my personal blog, so I was nervous - but all was fine, Jon is awesome and I'm glad we finally got to meet!

So, another successful author tour - and so much fun! Every author was wonderful, I loved all the people I finally got to meet/see again, and now I have a freakin' sweet stack of books to get crackin' on! I'm thinking I may have to go for Shadow and Bone first, because the cover art, map and reviews are too positive to ignore.
The remaining Fierce Reads tour dates/locations are below - and I highly recommend going if you can!
June 14: Naperville, Illinois | June 15: Lansing, Michigan | June 16: Pensacola, Florida
June 17: Rhinebeck, New York | June 18: New York, New York
Posted by Ashley @ Ashley Loves Books at 3:22 AM