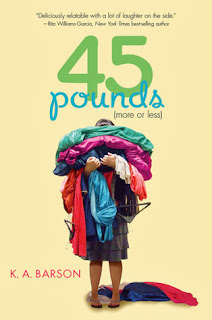 Here are the numbers of Ann Galardi’s life:

Welcome to the world of infomercial diet plans, wedding dance lessons, embarrassing run-ins with the cutest guy Ann’s ever seen—-and some surprises about her NOT-so-perfect mother.


I'm still not at my ideal weight. I didn't lose forty-five pounds before the wedding. Who knows if I ever will. I've lost twenty-seven and a half pounds, and that's better than nothing. Somehow, though, today I'm thinking more about what I've gained than what I've lost.

This seemed like such an interesting premise, especially for a YA book – we all know obesity has become a big problem, but I feel like it’s not ever so frankly tackled in the literary world. As soon as I saw this, I knew I had to read it.


And I knew I had personal ties to it. I’ve been overweight since I was 9. I’ve literally been 5’3” since the 3rd grade, and I started growing my “womanly curves” at the same time. Since then, it’s just been a steady increase in width, even though I never got the height to go with it. I don’t diet, ever, for reasons too personal for a book review; but the struggles that Ann goes through? I know them. They are mine. They are things I face daily, I will continue to face daily no matter what I do or how many numbers my size decreases. They’re constant and consistent, no matter what we do.

So of course, as predicted, sometimes I had to put this book down because it was too many of my own insecurities out for the world to see. Those are private thoughts, you know? And now they’re here. But at the same time, I think that’s what made me love this book more, because I finally feel like there’s someone who understands and I know I’m not alone. I sincerely wish I’d had this book in high school, because it would have helped. And even still, at 26, I’m so glad to have this in my life now because I still feel like this, 10 years later.

Taking this out of the personal ties, I do really love this book! I love that Ann is still a person, not just some bitter fat girl. That her struggles are real, but so are her triumphs. I really like that she’s still “normal” to an extent. She’s had friends, she gets a job, she doesn’t get rude slurs and things thrown at her every other page like I’ve seen some fat people get in books. She’s still a teenager, still has love around her, still normal.

Her family is a bit bizarre, and I love how it plays into Ann’s life and what she does. Yes, her dad is a dick (the book’s words! Not mine!); and yes, her mom is pretty pushy—but I love that there’s a reason for all that be so. That there is resolution to all of that, and that it serves a purpose. One of the best parts to this plot was the support Ann had when she started in on the diet. I know sometimes the support was a little too aggressive, but that’s a very real situation sometimes. People try to help, but they don’t realize that it’s just hurting in the end. While support is appreciated, sometimes it makes it a little worse, too.

Something else fantastic? That Ann goes through normal teenage things like friendship problems, boy troubles and first-job woes, too. They’re fun and funny, and give a nice rounding of normal to this story at the same time. Jon was absolutely adorable, and it meant so much to me as an overweight reader that his parts and her weight rarely crossed, if ever. And I’m so glad that Raynee came into play, too, because she’s a friend we can hope to find in life.

When I was nearing the end of this book, I started to wonder how it would wrap up without being some stupid cliché ending about realizing her worth is more than the number on the scale, that it’s inner beauty and blah blah blah. So I was happily surprised how they brought in her younger step-siblings and made it play a part in the end! I won’t spoil how, exactly, but it made so much sense and I felt really does better at driving the point home than Ann just realizing it about herself.

Of course, I’m happy that there were lessons like the cliché “inner beauty” in here, because ultimately, it’s true. I’ve taken a long time to realize that I have more to offer than a fat stomach and huge arms. It’s been a lifelong struggle of doublechins and chipmunk cheeks, but I can recognize that I should take pride in them since they’re prominent when I’m laughing and smiling. How 45 Pounds (More of Less) tackles that is fantastic, and I hope those readers who see themselves in here can recognize it, too.

So after all this, what’s my number for this book?