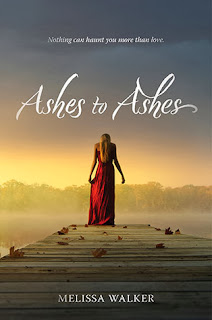 When Callie's life is cut short by a tragic accident, she expects to find nothingness, or maybe some version of heaven.

Instead, her spirit travels to the Prism, an ethereal plane populated by the ghosts she thought were fictional. Here she meets a striking and mysterious ghost named Thatcher, who is meant to guide her as she learns to haunt and bring peace to the loved ones she left behind.

However, Callie uncovers a dark secret about the spirit world: The angry souls who always populate ghost stories are real, dangerous, and willing to do whatever it takes to stay on Earth, threatening the existence of everyone she ever cared about.

Notable Quote
…it's such an abstract concept. Reaching out feels so much more natural to me.

There is one main thing that I think a person should know going into reading Ashes To Ashes: this is a duet. There will be a second book! I had absolutely no idea when I read it, I thought it was a standalone—but as I crept closer and closer to the end of the book, I started thinking, “Hmmm…all these questions and still ninety BILLION questions?!” And I remember thinking good heavens there BETTER be a second book, else I’m not even going to bother rating this it infuriates me so much! (Book blogger threats. They’re real.)

So, PHEW on that front. Knowing that, I definitely like this book the more I think about it. When I first closed it, I thought it was a bit odd, and unsatisfying, and that there were too many questions without answers. And while I do still think there weren’t enough answers, it wasn’t enough to put me off from wanting to pick up Book 2.


I’m not a big paranormal person, so I was a bit iffy going into this novel. I haven’t quite figured out my feelings on ghosts and the paranormal happenings in life; and I have even less experience in my books. But I like Melissa Walker, I adore most of her contemporaries that I’ve read and I thought this would be a good way to get into it. And I’m glad to say I gave it a shot!

The concept of the Prism is pretty interesting to me, I like that we try to help our loved ones get over our death. I found that delightfully satisfying and fulfilling, and I kind of hope that is the real reason ghosts haunt. Not their own unfinished business, but the unfinished business of helping someone else. I loved the personal ghost prisms they each had too, the concept of why they’re built as they are and that it’s an area for them to recharge. Kinda made me wonder what my personal prism would look like (as vaguely morbid as that seems). And I quite enjoy the little bits of humor and puns regarding life/death/having a life in death.

I have to admit that there are still some predictable parts, that I knew why Callie could feel and still had her memories and emotions as a ghost—that seemed pretty easy to figure out, and that definitely influenced how I felt about certain scenes where that affecting things. It took away some surprise to the book, but there were still enough moments for me to overlook that.

I found I really liked most of the characters, too. Carson was a great friend, I loved how into the spirit world she is and how she connects with all that. She was a fantastic friend to Callie, even after she was gone, and I started hoping that my friends were like her. Nick is…well. He was probably my least favourite of the good characters, but I didn’t particularly not like him. He felt mostly incomplete to me, like I was given him as a part to the story without explanation or real connection. Leo was creepy. He was so, so creepy. Written well, and a great character, but like Callie, I would shiver and dread every time he showed up on the page. The entire idea of some ghosts existing who did not want to move out of the Prism and into Solus was dark and scary; and Leo just took it to an extreme. That’s some great writing where I would hate seeing his name on a page.

I am SO FREAKIN’ CURIOUS. Omg. There are so many questions, and I don’t have answers, and omg you guys I NEED THEM. Why was Nick going to…well, you know. What is going on with Carson? Who is H? Why is Thatcher so freakin’ hot and amazing and man aliiiiiiiiive do I want that ghost. The book ended fairly well in terms of leaving you satisfied enough for the book but wanting more.

Last, random thing: I love the title font on the cover. I really, really draw towards the first “Ashes” being different than the last “ashes.” I don’t quite know why, but I know I really loved it.