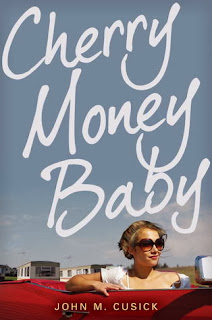 Hollywood glitz collides with workingclass aspirations in this satirical tale of an impulsive starlet and a sharp-witted small-town teen.

Cherry Kerrigan loves her simple life, her family’s tiny trailer, even working at Burrito Barn. Forget college — she’s marrying her sweetheart from next door. But here comes Ardelia Deen, a glamorous starlet who sweeps Cherry into a world of fast cars and penthouse parties. Now Cherry’s small-town life just seems so . . . small. When Ardelia drops a bomb of an offer — one involving a baby — Cherry knows her life will change forever, no matter what she decides. John M. Cusick focuses his signature wit on Hollywood royalty and the wide-eyed dreams of Small Town, U.S.A. in a novel about discovering who you are . . . and changing your mind.
-------------------------Goodreads summary

I’m not sure this book was anything like I expected, though I have absolutely no idea what I initially expected! It sounds like it’s going to be a predictable novel about a trashy white girl who suddenly gets exposed to the big, wide world and how it messes up her life. And sure, I guess you could trivialise it down to that if you really wanted – but it’s actually SO much more. It’s about who you are because of where you are, because of what you are, because of all the things you never knew you could be. It’s about society and exposure, celebrity culture and “normal” culture.

I have to be upfront about this: I didn’t really like Cherry. As a person, that is; Cherry as a character was fantastic. She’s so strong and distinct, and I suspect unlike any other YA protagonist. She’s different, and she revels in it. That part is pretty awesome. But her personality grated at me. She was just so…stubborn. Maybe I didn’t like it because I’m stubborn too, I don’t know. I did like her family though, and how loyal she was to them and Lucas. As much as I can whine about her, I can say that there are endearing traits as well.

I did, however, love Ardelia, and not just because I love her name so much. She was flighty and fabulous, just the right amount of over-the-top celebrity characterization mixed with a real person. She is someone I’d love to get swept up in and taken on adventures with all over the city. I don’t question how she and Cherry fall in together; Ardelia had that wonderful sense of just accepting anything and rolling with everything presented to her. Very early on (the candy scene, actually), I knew I’d love her.

Even though the entire book itself was unexpected, I have to admit that some of the storyline itself was a bit…predictable? Not in a premonition, I know what will happen the moment I read the opening line way. But it just seemed a little sensible what was going to happen, once you found out it would. (I have no idea if that makes sense to anyone who hasn’t read this. Disregard if you’re staring at the screen like I’m a big ball of crazy right now.) I do love how the book is split into essentially 3 sections of Cherry, Money and Baby. It really made a great tone and flow for the story.

Cherry Money Baby is a surprising read, one that will touch your heart at the same time as making you laugh out loud. There’s tons of adventure, a little bit of heartbreak and suspense, and a whole lot of fun. And the best part? Cherry’s potty mouth. Damn if I love some good foul language in a book.