Review: The One Thing by Marci Lyn Curtis (ARC) 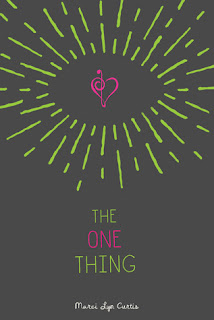 The One Thing by Marci Lyn Curtis
Disney-Hyperion, 336 pages
Expected US Release Date: September 8, 2015
Format/Source: ARC via Around the World Tours - thank you!

Maggie Sanders might be blind, but she won't invite anyone to her pity party. Ever since losing her sight six months ago, Maggie's rebellious streak has taken on a life of its own, culminating with an elaborate school prank. Maggie called it genius. The judge called it illegal.

Now Maggie has a probation officer. But she isn't interested in rehabilitation, not when she's still mourning the loss of her professional-soccer dreams, and furious at her so-called friends, who lost interest in her as soon as she could no longer lead the team to victory.

Then Maggie's whole world is turned upside down. Somehow, incredibly, she can see again. But only one person: Ben, a precocious ten-year-old unlike anyone she's ever met.Ben's life isn't easy, but he doesn't see limits, only possibilities. After awhile, Maggie starts to realize that losing her sight doesn't have to mean losing everything she dreamed of. Even if what she's currently dreaming of is Mason Milton, the infuriatingly attractive lead singer of Maggie's new favorite band, who just happens to be Ben's brother.

But when she learns the real reason she can see Ben, Maggie must find the courage to face a once-unimaginable future...before she loses everything she has grown to love.
--------------------Goodreads Summary

I have this bad habit of skimming and skipping around a book if I’m a little bit bored or slowed by the pacing of the story. Or if I can predict and guess, and I’m pretty sure of myself, I just kinda…hop ahead to check.

And I did that with The One Thing. I knew going in why Maggie could see Ben – I feel it’s pretty obvious, actually. And then I wasn’t sure how much I really liked her, and some of the beginning stuff bothered me…but I still wanted to know! So I hopped. And found out I was right! And a little bit wrong, too. And that way more happened than I thought would, so I went back to read some of the parts I missed, and I was actually kinda bummed that I robbed myself of a decent story and development.

The one thing I definitely loved about this book
is the distinct voice Marci Lyn Curtis writes with. It’s so unusual but completely relatable, and I felt like each character could really have their own personality shine through the voice Marci was able to write. I was also quite impressed with how much is packed into this story! How much happens, the different people, how music ties in, the shows, learning with Maggie how to adjust to being blind…there was a lot in here, that somehow all flowed together really well.

The one thing I liked about the book
was the characters. Ben and Mason especially – they were sweet and kind and funny and sometimes infuriating, but always lovable. Sometimes I thought each were a little cliché, but it also worked within the story, too. It’s like they needed to be a little cliché to balance out all of Maggie’s hard lines and inflexibilities and attitudes.

The one thing I wasn’t too sure about
was Maggie. Sometimes I really liked her! I thought her as a character was great, and if I were in her situation and how she went blind, I’d actually probably be a lot shittier of a person with an even worse attitude. But there was also something about her that I just didn’t quite like, on a reader level. She’s bitter and hard headed and negative – which is fine! But I just couldn’t find enough to balance her out into a likeable person, either. She kind of got there in the end, but that was a progression totally predictable and expected.

The one thing I definitely did not like
was how little her probation officer and prank played a part in the book! I was expecting some awesome rebellion, fantastic community service stories, things like that! And it just…wasn’t as big a thing as I expected or wanted. I was also not a fan of what the title was literally directed to. I liked the concept of The Thing, and Maggie’s thing, and Ben’s Thing and just…the idea of a Thing. But hers, and how it worked into the story? A little too convenient, in my opinion.

The One Thing had it’s ups and downs with me, but overall was an incredible story from a literary standpoint, as well as a bit on the personal front. The one thing I didn’t mention in here was the enormous amount of heart and strength that comes from each character, and I definitely think that ‘s the reason anyone should pick this book up.