Review: A Curious Tale of the In-Between by Lauren DeStefano (ARC) 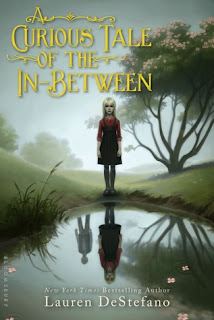 A Curious Tale of the In-Between (Pram #1) by Lauren DeStefano
Bloomsbury, 240 Pages
Expected US Release Date: September 1, 2015
Format/Source: ARC via Around the World Tours - thank you!

Pram Bellamy is special—she can talk to ghosts. She doesn’t have too many friends amongst the living, but that’s all right. She has her books, she has her aunts, and she has her best friend, the ghostly Felix.

Then Pram meets Clarence, a boy from school who has also lost a parent and is looking for answers. Together they arrive at the door of the mysterious Lady Savant, who promises to help. But this spiritualist knows the true nature of Pram’s power, and what she has planned is more terrifying than any ghost.

Lauren DeStefano is beloved by critics and readers alike, and her middle grade debut is lyrical, evocative and not to be missed.
-------------------Goodreads Summary

Notable Quote
Saying it aloud was an admission as well. No wonder she'd grown up in a house where nobody said they loved anyone; what a terrible pain that word caused.

If someone asked me to describe the perfect Middle Grade book, I would probably reference A Curious Tale of the In-Between now. I’m not sure what I would have said before (this is excluding Harry Potter of course, because that’s just all ages), but I can certainly tell you now that everything you’re looking for is probably found in this little book.

I’m not even a big “spooky” story lover. And it’s not like A Curious Tale was terrifying or nightmare inducing – it was just the right amount of spooky and creepy with adolescent curiosity and innocence. I thought DeStefano handled that weird middle-time of being a kid and learning there are bigger, sometimes better and definitely sometimes worse, things in life. It’s a very strange transitional stage, and she did fantastically well not only representing it, but also maneuvering through the Big Life Things and cutesy childhood moments.

Lauren DeStefano’s YA books always have this fantastic storytelling creativity to them. They’re original and unique but entirely relatable and human – and she’s carried this into her MG story as well. I never went through seeing ghosts as a kid, but I still felt like I could have been Pram in so many parts of this story. Her curiosity, her strangeness, her sadness and big heart and emotions…they were all so real to me and felt like it was a part of me, too.

I absolutely love love loved Clarence and Felix. If I were in High School English classes, I would have had so much fun analyzing them and who they represent to Pram and her stages in life – but this is a review, not a report, and I won’t. But trust that they are enjoyable from a literary analytics view, and just as characters from a reader. Both were unique and loveable in their own ways, and I wish I had them as friends when I was younger, too.

A Curious Tale of the In-Between was an adorable read, but also one I feel like is important to the Middle Grade book roster. It represents that time in life where you’re growing from a kid into a teenager and struggling to find your identity within your family, within your friends, and within yourself – and it represents it entirely well. The story is evocative and enjoyable, strong and so, so original. I highly recommend reading it.