Review: Say What You Will by Cammie McGovern (ARC) 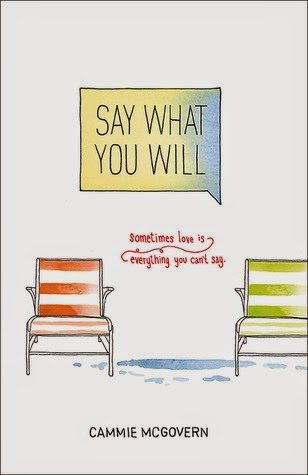 Say What You Will by Cammie McGovern
Harper Teen, 352 pages
Expected US Release Date: June 3, 2014
Format/Source: ARC via Around the World Tours - thank you!

John Green's The Fault in Our Stars meets Rainbow Rowell's Eleanor & Park in this beautifully written, incredibly honest, and emotionally poignant novel. Cammie McGovern's insightful young adult debut is a heartfelt and heartbreaking story about how we can all feel lost until we find someone who loves us because of our faults, not in spite of them.

Born with cerebral palsy, Amy can't walk without a walker, talk without a voice box, or even fully control her facial expressions. Plagued by obsessive-compulsive disorder, Matthew is consumed with repeated thoughts, neurotic rituals, and crippling fear. Both in desperate need of someone to help them reach out to the world, Amy and Matthew are more alike than either ever realized.

When Amy decides to hire student aides to help her in her senior year at Coral Hills High School, these two teens are thrust into each other's lives. As they begin to spend time with each other, what started as a blossoming friendship eventually grows into something neither expected.
---------------------------------Goodreads summary

Notable Quote
I have learned that many people have disabilities they must make their peace with.

There are so many things I can’t say about this book, simply because I feel like there are no words that can accurately describe it. If ever a standout in the YA genre, it is Say What You Will, in almost every aspect.

The obvious way is that it deals with two characters who have their own handicaps: Amy, with her disability, and Matthew, who seems fine but you learn has his own disabilities that cripple him—perhaps not in the same visual way as Amy, but he has them, certainly. And it is astounding to see how they are handled in a young adult book, amongst all the usual drama and stress and emotions of a Senior year.

These characters are also incredibly unique to any book I’ve read. They’re both quite strong, as people and as they are written. Their downfalls and their own handicaps are integrated really well into their personality, and I love that both are much more than their issues. Just as we always hope “cancer books” aren’t just about the cancer, this book is most certainly not just about Amy’s disability.

I want to talk so much about Amy and Matthew, about how they are together and separate, how they really are better with the other…but I really can’t without saying what exactly ails Matthew and how, without saying what exactly they endure. So I’ll have to leave it at this: I’ve never met anyone quite like the two of them, with their quiet, strong demeanors. Who are somehow both closed off and entirely open to new people and things. Who confront being uncomfortable with a resolve I wish I had.

But I can say that this story is beautiful, that this is a friendship built on so much more than days spent together. That it’s written so well, with their words and emails and texts and her Text. That I was caught by surprise in so many instances, both big and small, in big moments and small ones. There is so  much heart and tenderness in these pages, I honestly thought I wouldn’t be able to control all the out-of-control beating of my own heart. And I can also mention that I was not impressed with all the parents in this book—not in terms of the writing, that was still great. But the parents themselves and what they do (and didn’t do) in the book make me very crabby when I think of it haha.

Say What You Will is a stunning addition to the YA contemporary world, introducing new characteristics while retaining all the emotions and feelings we crave and love. It is a beautiful story of friendship and love, and friendly love and loving friends. It’s also about confronting and accepting faults and flaws, and learning to not necessarily overcome them, but absorb them into who you are. And that is a fantastic lesson for us all to learn.