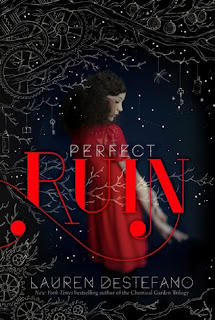 On Internment, the floating island in the clouds where 16-year-old Morgan Stockhour lives, getting too close to the edge can lead to madness. Even though Morgan's older brother, Lex, was a Jumper, Morgan vows never to end up like him. She tries her best not to mind that her life is orderly and boring, and if she ever wonders about the ground, and why it is forbidden, she takes solace in best friend Pen and her betrothed, Basil.

Then a murder, the first in a generation, rocks the city. With whispers swirling and fear on the wind, Morgan can no longer stop herself from investigating, especially when she meets Judas. He is the boy being blamed for the murder — betrothed to the victim — but Morgan is convinced of his innocence. Secrets lay at the heart of Internment, but nothing can prepare Morgan for what she will find — or who she will lose.
--------------------Goodreads summary

Notable Quote
"Forget who you are." I pause in the doorway. "That's the answer to your question," he says. "Forget who you are and what you think is there, and you'll discover things that don't exist to be known."

I'd never read Lauren's Chemical Garden trilogy, but I'd heard so much about her writing and writing style - and actually? I follow her on Twitter and can tell she's got a distinct voice. She does for herself, and I was certain it translated to her actual writing as well. And it REALLY did! I found myself falling into her writing, getting lost in her descriptions and the way she would express feelings or situations. There's a lovely lyricism to her, similar to how I feel when I read Lauren Oliver books (or listen to Lauren Oliver talk).

I think I found the relationships in this novel to be the most intriguing element, and the one I had the most fun watching and discovering. I adored Basil, though I admit sometimes I wondered if I felt like I had to since he was Morgan's betrothed. The idea of the betrothed was also interesting in itself, and I kind of liked that people accepted it and didn't quite resent it (Pen as the sort-of-almost-exception), and that it actually worked out! Arranged marriage is something so frowned upon in the US, and it was fascinating to see a world where it was accepted, even preferred.

There were a few moments in the plot that truly surprised me, which I loved -- sometimes with Dystopians like this I can see where it would head or just what makes sense, and it's vaguely disappointing when it works out that way, no matter how great it is. But there were some twists and turns that really caught me off guard! Especially once the Prince and Princess got involved, that was...man. I never knew what it was to completely scoff at people who seem so frivolous and vacant - which is where Lauren DeStefano just took me into her story completely and made me realize how well she can truly play someone with her words.

Speaking of characters, can we talk about how much the Jumpers and Lex just broke my heart? He's got such a creative darkness inside him, every time he showed up on the page I wanted to hug him and hold his hand to lead him through the world. There was a specific quote early on that just made me love him, no matter how terribly he would sometimes treat people. "He keeps pressing his palm into my knuckles like I might vaporize into nothing if he doesn't hold tight. Sometimes he hides in the darkness of his blindness, and other times he fears it will swallow everyone up and leave him alone."

When I finished reading, even though I was completely taken with the words and was dying to know who was on the ground and what was going to happen, I knew unmistakably that this book was a 4 star for me. And it took me a few days to mull over and figure out why. I think I felt like the movement of the book was a little slow. I don't want it to be some action-packed thriller, that wouldn't fit with Morgan or the tone or the pacing...but sometimes I just felt like it could have had a little more of plot movement rather than explanation/feeling/dwelling. That's not to say I didn't love those bits (and I think I may have actually loved ALL of them), but a little bit more action to break it up would have been nice.

I was also fascinated with the entire world of Internment. Lauren's world building is pretty great, giving us a whole picture of a new type of living, a new space to live. I feel like there are some dark sections in her descriptions that weren't entire fleshed out, but I think that may have been on purpose; and may be revealed later in the series. Intentional or not, it worked together and really made me feel like I could look in the sky and see this floating ground between the clouds.

Overall, I was really impressed with the structure of this book. Somehow, Lauren made me feel exactly what Morgan did in terms of Internment. I liked the world, I was ok with it--but curious about the outside and the ground. And as I learned more, my curiosity grew and grew until I was starting to feel like Internment wasn't a haven, but an isolation. And in that isolation, there is loneliness and the need to find other options, other means; and just like Morgan and her family and friends...it seems like their only option is the Ground.

Perfect Ruin was a fascinating novel filled with an ethereal world that appears to be a savior but may, in fact, be much more. It's filled with writing to make you fall in love, relationships that make you question, and situations that make you consider where you would fall in with this world.