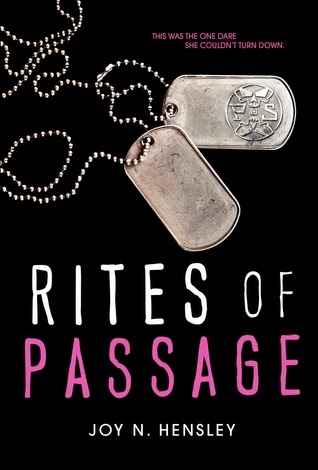 Rites of Passage by Joy Hensley
HarperTeen, 416 Pages
US Release Date: September 9, 2014
Format/Source: ARC via Around the World Tours - thank you!

Sam McKenna’s never turned down a dare. And she's not going to start with the last one her brother gave her before he died.

So Sam joins the first-ever class of girls at the prestigious Denmark Military Academy. She’s expecting push-ups and long runs, rope climbing and mud-crawling. As a military brat, she can handle an obstacle course just as well as the boys. She's even expecting the hostility she gets from some of the cadets who don’t think girls belong there. What she’s not expecting is her fiery attraction to her drill sergeant. But dating is strictly forbidden and Sam won't risk her future, or the dare, on something so petty...no matter how much she wants him.

As Sam struggles to prove herself, she discovers that some of the boys don’t just want her gone—they will stop at nothing to drive her out. When their petty threats turn to brutal hazing, bleeding into every corner of her life, she realizes they are not acting alone. A decades-old secret society is alive and active… and determined to force her out.
At any cost.

Now time's running short. Sam must decide who she can trust...and choosing the wrong person could have deadly consequences.
----------------Goodreads Summary

Notable Quote
"You are not a drop in the ocean. You are an ocean in a drop."

Not that it isn’t a fantastically full book now, you know. I’m just saying, I’d like to know what happens…after. What happens to him, and to her, and them, and…yeah.

Rites of Passage was a surprise read for me, in a lot of ways. If you’ve been a longtime reader of my blog, you know my military stuff—and I was a little scared it would trigger something. But it was an entire other facet to military life, and I found it so interesting and eye-opening. I’ve heard stories and known people who went to military academies or schools, but this is the first I’ve ever taken the time to let details sink in.

I was also surprised at the depth and complication in this story. There’s more to it than an Army BRAT feeling the need to prove herself in a military family and military world. That’s there, of course-but add in family things, romance things, friends things, facing the academy as one of the first girls admitted, the hazing and bruises and behind-closed-doors smokes (not quite what you’re thinking, I swear)…there’s a lot going on, and it all intertwines masterfully.

The romance. Drill. Oh BOY. I liked that Sam’s feelings for Drill were actually…not that big of a deal in the book. I mean, it’s a big deal since that’s strictly forbidden, but this story wasn’t just their hidden feelings. It was just a small part to the larger plot, and it worked so well. And that’s a big deal for me to say: I’d take romance over everything else any day! But in Rites of Passage, it was a great element that enhanced an already full and compelling story. A great little part of the whole.

This is one of the few books I’ve read this year that really captivated me, that really made me clutch at the pages and wonder what was going to happen. I read pretty fast in general, but I couldn’t read fast enough to know what was going to happen and who would do what and would Sam be ok?! There were so many moments of fear, of hope, of pride, of feelings and emotions as I went with Sam through her first year and watched her fight and struggle for her place at the Academy. There were bright spots, like Drill and her Alpha friends; and there were dark spots, like the Society and just how cruel and far they went. But all of it together was phenomenal.

Rites of Passage is a compelling, brilliant story of a Strong Girl fighting for her place, of a girl out to prove her worth and so much more. Following Sam and her story was heart-wrenching and breathtaking and a little bit terrifying—but I’m so glad I did.

Not If I See You First - Eric Lindstrom

UP NEXT:
Shadow & Bone - Leigh Bardugo