Review: The Boy Next Door by Katie Van Ark (ARC) 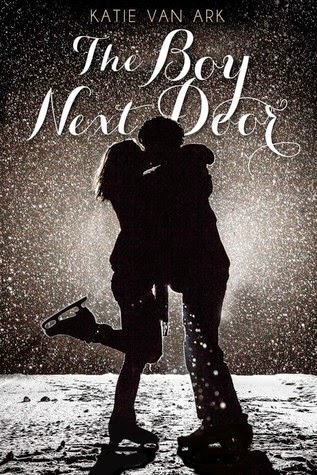 The Boy Next Door by Katie Van Ark
Swoon Reads (Macmillan), 368 pages
US Release Date: January 6, 2015
Format/Source: ARC via Around the World Tours - thank you!

Maddy Spier has been in love with the boy next door forever. As his figure skating partner she spends time in his arms every day. But she’s also seen his arms around other girls—lots of other girls.

Gabe can't imagine skating with anyone but Maddy, and together they have a real chance at winning some serious gold medals. So, he’s determined to keep thinking of her like a sister. After all, he’s never had a romantic relationship that lasted for more than two weeks.

But when their coach assigns a new romantic skating program, everything changes. Will this be the big break that Maddy’s been hoping for or the big breakup that Gabe has always feared?
----------------Goodreads Summary

Notable Quote
I look at Mad, zipping through her brackets. She attacks the twisty turns, the determination fierce on her face. She puts so much power into the pattern that she almost slams into the barrier at the end. That’s the problem. I’ve compartmentalized my life for so long but Mad has no fear of the barrier.

So far I’ve read two of Swoon Reads’ books, and let me tell ya: they are definitely living up to their name! Maddie and Gabe’s story is filled with moments that stole my breathe and made me swoon so hard I actually put my hand over my heart at one point.

I’ll admit that I was shocked this got so…graphic. It’s not lewd or anything, but it’s…they go there. You know. IT. And I was kind of shocked! I don’t mind it, I found it to be quite fitting of the story and done very tastefully. Mostly I’m glad it’s there, because sex in teenagers is a very real thing. And regardless if I agree or disagree with it, I like that this one came with the knowledge that it happens, that it can happen, that some people don’t wait, and that some people do. It’s very real in that sense.

I’ve mentioned on here a few times how obsessed I am with figure skating, but I’ll say it again: I am OBSESSED with figure skating. Seriously. I watch it any chance I get—and not just during the winter Olympics. I used to have a poster of Nancy Kerrigan on my wall when I was younger, and I still have a deep-seeded hatred for Tonya Harding. So I definitely loved the setting and setup to this novel! Figure skating, especially pairs and ice dancing, are incredibly romantic at the core. The fluid movement, the trust in another, how close and emotionally charged everything is…this is all the makings for some serious swoonage.

Maddie annoyed me. Dear God. I wanted to push her so many times and tell her to stop flip-flopping between certain things and just…go for it. She was a bit of a strange mix of strength and indecision…and it’s not that it isn’t realistic, but something about it bugged me. Between the pair of them, Gabriel was my favourite by a long shot. He was a typical guy, and you kind of hated him in the beginning with his revolving spin of girls…but then you come around to him. And that was nice.

As always, I liked the element of family in here and how much it influenced Maddie and Gabe. How it was a reason they were who they were, and how it’s a reason they have so many cracks and fissures, too. I was a little nervous knowing Maddie’s father is a politician and how that would be portrayed (government and politics makes me nervous in novels, for personal reasons), but it actually was handled very little and quite well. Supportive families are wonderful in YA books, and this one was done right: supportive and kind, with lives of their own and problems to take care of. None of it diminished any of the other areas, and that was fantastic.

If a reader wants a fun romance with serious swoonage and heart stopping moments, The Boy Next Door is the perfect read. While I wasn’t entirely into the female MC, everything else was so wonderfully realistic and real that I can overlook her.