Review: Broken Hearts, Fences, and Other Things to Mend by Katie Finn (ARC) 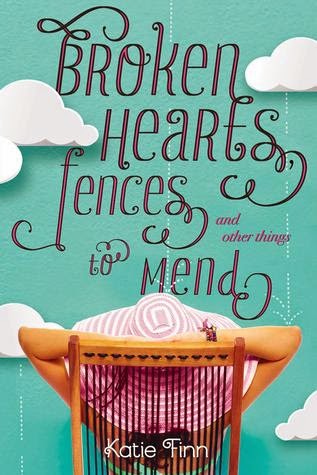 Broken Hearts, Fences, and Other Things To Mend (Broken Hearts & Revenge #1) by Katie Finn
Feiwel & Friends (an imprint of MacTeen), 339 pages
US Release Date: May 13, 2014
Format/Source: ARC via Around the World Tours - thank you!

Gemma had her summer all planned out, but it takes a sharp turn when she gets dumped and finds herself back in the Hamptons after a five-year absence.

Being there puts her at risk of bumping into Hallie, her former best friends (that is, before Gemma ruined her life). But people don't hold grudges forever. Do they?

Gemma intends on making amends, but a small case of mistaken identity causes the people she knew years ago—including Hallie and her dreamy brother, Josh—to believe she's someone else. As though the summer wasn't complicated enough already.

Is it weird to call a book that has Broken Hearts in the title sweet? Because this book kind of is. Don’t get me wrong, there’s some heartbreak and revenge and redemption and contempt and guilt and penance, too…but there’s also this strange level of sweetness in the characters and some of the plotlines, too. And that I quite enjoyed.

I’m not going to lie here: I considered DNF-ing this book. It’s not that it was bad…it’s just that I wasn’t too enthralled in it either. I was never “omg I can’t put this book down” riveted, and that made it a little hard for me to get through in the beginning. Especially since mine was a touring ARC so I was on a deadline, and I had other things to do…it just seemed like I could skip through some of it.

I am glad I stuck with it though. Sure, I guessed a lot of it (some seemed quite obvious), but there were small scenes or nuances that really made this book worthwhile. It never really got to breakneck speeds or heart-may-give-out emotion, but there were real moments that got me.

One of the best things to know before reading this book is that it is part of a series! I’m not sure how I missed that, but I have a tendency to read acknowledgements before the book (I have no idea why)—and luckily I saw in the back a little page about the next title. So, that was REALLY good to know why, elsewise I’d’ve been pretty damn pissed getting towards the end. There is absolutely no real closure at the end, and it would have made me lose it if I’d not have known.

But that no real closure thing? It’s probably one of the better parts of this novel! I mean, I had a few guesses, but…there’s a reveal, and oh MAN. Even though I had a thought, the writing of it is still so damn gripping. I was outraged, I wanted to just…oooooh boy. I’m just glad I was reading this in bed so I could punch my pillow a few times. Because damn.

Let’s talk characters, real quick: I quite liked the ones in here. I thought Gemma was a little flat at times, she doesn’t have much beyond knowing why she wronged and wanted to right it. She did improve throughout the story though, and I think she’ll just grow and better herself as the series moves on. Hallie was ok, though she’s a bit predictable to me. I love love LOVED Josh. Oh man, he is a fantastic love interest, and I am most certainly interested in him. Each of the secondary characters were pretty good too, though very obviously secondary. They had their few traits, and that was that throughout the story.

I was impressed with the “why” of what Gemma had done. There are few things short of violence that I could imagine to be really regretful of when you’re a child, and this one actually made a lot of sense.  In terms of creativity, Katie Finn has it in spades.

I also have to talk about the writing as a whole. For those who don’t know, Katie Finn is the pseudonym of a very loved contemporary YA author. I’m not going to say who (you can find out pretty easily), but there is a pretty good distinction between her “normal” and her pseudonym. I definitely prefer her books as the other, but there is something charming and fun to this book as well. Aside from the point of all this being making good and revenge, this is a pretty great summer read, one I’d love to bring with me to the beach and settle in for the long haul.

Broken Hearts, Fences and Other Things To Mend was a little slow going for me, but ultimately I enjoyed it quite a bit. The plot is wonderfully written and creative; and even though a smidgen predictable, it’s still a lot of fun to go through. And if anything, read this to know Josh. Just remember that I knew him first!!

Review: Just Like the Movies by Kelly Fiore (ARC) 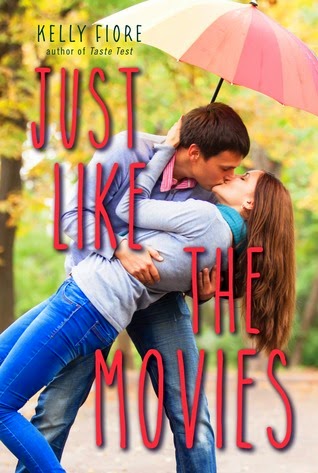 Just Like the Movies by Kelly Fiore
Bloomsbury-Walker BFYR, 300 Pages
US Release Date: July 22, 2014
Format/Source: ARC via Around the World Tours - thank you!

Pretty and popular track star Marijke Monti is confident about almost everything – she’s got great friends, a great family, and she’s on her way to the State Track Championship. In fact, the only thing Marijke isn’t confident about is her relationship with Tommy Lawson.

Lily Spencer has spent her entire high school career preparing for the future – she’s participated in every extracurricular activity and volunteer committee she could. But, at home, she watches her mother go on date after date with dud-dudes, still searching for “the one.” Lily realizes that she’s about to graduate and still hasn’t even had a boyfriend.

While they live on each other’s periphery at school, Lily and Marijke never seemed to have much in common; but, after a coincidental meeting at the movie theater, Lily gets an idea – why can’t life be like a movie? Why can’t they set up their perfect romantic situations, just in time for their senior prom, using movie techniques?

I can always count on Bloomsbury to give me a good book. As soon as I hear about one they’re publishing, it’s almost guaranteed to be on my TBR—and almost always a fantastic novel, anyway. Just like the Movies made me worry, just a smidge, because it sounds kind of cheesy, you know? But it really delivered, and I loved it just as much as the others from this publisher.

I’m not going to tell you this is a deep book, one that makes you think and ponder—but you shouldn’t really pick up a book about emulating and recreating romantic movie scenes if you’re really looking for that. It’s a bit fluffy, a lot romantic and fun with just the right amount of surprise and tenderness to really make it a solid contemporary.

Marijke’s boyfriend was probably one of my favourite characters. I was not really a fan of him as a person (if he were real. You know what I mean), but his role in the book, his own character development and how honest and true he was…that was one of the better parts. Someone like him is definitely stereotyped in contemporary YA, and he was a nice surprise.

Is it just predictable if I compare this to a chick flick? Too obvious of a comparison? I don’t even care, I just did it! This is really the perfect chick flick of a book; two girls who have nothing in common find common ground with an outlandish (but actually doable) solution, and make it happen. And what results is funny, a little scary, something to make your heart beat and skip and generally get twisted and tossed around. Some of it is predictable, I’m happy to report that some of it is not—but it’s also endearing and heartwarming and you just root for both Lily and Marijke to find what they’re looking for.

Just like the Movies may not be the hard-hitting, life-altering novel of the lifetime, but it’s a really fun tale with some surprising insights and a great story of surprise friendship and true love. And sometimes, that’s just what we’re looking for.