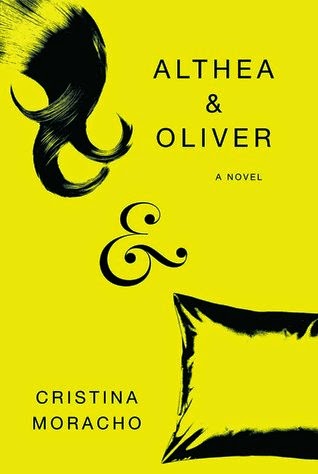 Althea & Oliver by Cristina Moracho
Viking Juvenile (an imprint of Penguin), 366 pages
US Release Date: October 9, 2014
Format/Source: ARC via Around the World Tours - thank you!

What if you live for the moment when life goes off the rails—and then one day there’s no one left to help you get it back on track?

Althea Carter and Oliver McKinley have been best friends since they were six; she’s the fist-fighting instigator to his peacemaker, the artist whose vision balances his scientific bent. Now, as their junior year of high school comes to a close, Althea has begun to want something more than just best-friendship. Oliver, for his part, simply wants life to go back to normal, but when he wakes up one morning with no memory of the past three weeks, he can’t deny any longer that something is seriously wrong with him. And then Althea makes the worst bad decision ever, and her relationship with Oliver is shattered. He leaves town for a clinical study in New York, resolving to repair whatever is broken in his brain, while she gets into her battered Camry and drives up the coast after him, determined to make up for what she’s done.

Their journey will take them from the rooftops, keg parties, and all-ages shows of their North Carolina hometown to the pool halls, punk houses, and hospitals of New York City before they once more stand together and face their chances. Set in the DIY, mix tape, and zine culture of the mid-1990s, Cristina Moracho’s whip-smart debut is an achingly real story about identity, illness, and love—and why bad decisions sometimes feel so good.
------------------------Goodreads Summary

Notable Quote
"I'm not running away," she says. "I'm walking away."

I didn’t know what to think going into Althea & Oliver. I’d never heard of it until it popped up on the ARC Tour site I go onto, and because I am a sucker for all things duality and all things contemporary, I went for it. I mean, it seems pretty freakin’ interesting: a disease where you sleep for weeks, months at a time? That in itself is interesting, but then to get the best friends’ viewpoint in it too, and it seems she wants more? I tried to put myself into Althea’s place, and I knew I had to read it. (Because I would not be able to handle it. I have problems going a weekend without my best guy friend.)

At the beginning of the ARC is a letter from the editor that calls this book “a work of literature with teenagers in it, rather than a ‘YA novel’” and I was at first a little offended. You can’t tell me If I Stay isn’t literature. You can’t tell me The Fault in Our Stars isn’t a thing of beauty, that Wanderlove isn’t every bit the work of words and wonder it sounds like it is.

Althea & Oliver explores so many elements, from teenager things to new adult to young adult to adult things. The before and after, the friendship, the idea of wanting more, the knowing and needing of more and less. The family of friends, a dysfunctional family, a chosen family and a given family. Of making mistakes, horrible, terrible, absolutely shattering mistakes; to the realization and the attempt at fixing or repairing them. And then the failure, and the not-quite-a-failure-but-may-as-well-be.

I have to admit that I didn’t think Althea and Oliver were quite as opposite as they were made out to be. Althea is supposed to be the crazy artiste, the off-the-wall, on-the-cusp kinda girl; and Oliver is the steady, the rock, the grounded. But I don’t actually believe that—yes, I could see how she seems to be the revolving around his axis, but there’s a bit more to each of them, a bit more of the other in them. Althea definitely takes the more obvious route of being crazy and out of control, but Oliver has it on the internal.

Honestly, I’m finding it a bit hard to write a cohesive review for this book, because I have so many thoughts and feelings about it and for it and for them and how much I want to hug them. I’m a bit scattered—but it’s actually pretty representative of this book. There’s so much chaos and unknown and scattered thoughts and feelings throughout. I was so caught up with it, so taken along and invested in the ride I’m having a hard time pulling myself back from it.

And the ‘almost’ and the ‘favourite’ really got me. Oh god, did it get me.

Althea & Oliver may not be quite what it led me to believe, but I’m actually pretty happy about that because I’ve found a book that feels like it’s a little part of me, like it understood some of the hardest, more difficult aspects of my emotions and fears and feelings. It is a lesson that even in the screw-ups, even in the chaos and broken perfections, we can find enough to get us on the pathway back.