Review: Since You've Been Gone by Morgan Matson (ARC) 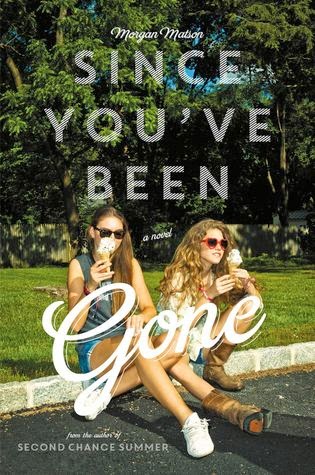 Since You've Been Gone by Morgan Matson
Simon & Schuster BYR, 449 Pages
US Release Date: May 6, 2014
Format/Souce: ARC via Around the World Tours - thank you!

The Pre-Sloane Emily didn't go to parties, she barely talked to guys, she didn't do anything crazy. Enter Sloane, social tornado and the best kind of best friend—the one who yanks you out of your shell.But right before what should have been an epic summer, Sloane just... disappears. No note. No calls. No texts. No Sloane. There’s just a random to-do list. On it, thirteen Sloane-selected-definitely-bizarre-tasks that Emily would never try... unless they could lead back to her best friend. Apple Picking at Night? Ok, easy enough.Dance until Dawn? Sure. Why not? Kiss a Stranger? Wait... what?

Getting through Sloane’s list would mean a lot of firsts. But Emily has this whole unexpected summer ahead of her, and the help of Frank Porter (totally unexpected) to check things off. Who knows what she’ll find?

Notable Quote
I don't think you have to do something so big to be brave. And it's the little things that are harder anyway.

Is there anything Morgan Matson can do wrong? I swear she has it all when it comes to writing. Amazing characters? Check. Growth and development that is both exciting and unpredictable and natural? Check. Friendships that are real and organic? Check. Brilliant boys who function as friends and like-like friends? Check. A wonderful writing style that invites you in and never lets you go? Check, check, and more check.

I have to say, while I love pretty much all and everything Morgan Matson does, probably the best parts of Since You've Been Gone to me were the small, nuanced details. Like that Frank was called "Frank Porter" through a lot of his introduction into the story. Because we all have or know those people who are just first+last name people, right? It's such a small detail, but it says so much about him. I was immediately given an idea about who he is and how he is viewed by that small thing.

Or the parallel between Collins and Frank's friendship to Sloane and Emily's, regarding an "extra" feeling to the relationship. I can't quite discuss it since it gives away some of the book if I were to go into details, but it was a subtle draw from the story, and it made it so much more whole, so much more like real life to me.

Of course I loved the big things, too. I thought Sloane was a bit strange and had a whole ethereal, hippie vibe to her--which was great. I felt very close to Emily and her character, who was a bit lost and looking. I really loved Frank Porter and Collins, they had such fun personalities and had great Best Dudes vibes and chemistry with each other. I was surprised how much I loved Dawn, too, and how she fit into the story. She came crashing in with tears and a teenage tragedy, and what she turned into was utterly fantastic.

I was really in love with the list, even though I didn't like how Sloane up and left Emily. It was such a fun, creative list, and I liked the ways that Emily fulfilled the items she could. Some were at face value, and others were a little more and a little deeper than I thought they would be--and it was better that way. It takes a lot to surprise someone when we're given a list from the beginning, but again, Morgan doesn't disappoint.

Sloane up-and-leaving Emily was something I didn't like, as mentioned--but I have to say, I understand it. I move around a lot, and I get why it feels easier to do that when you live a transient lifestyle…but I felt like Emily is the kind of girl you realize you can't do that to, and I was a little sad Sloane did. Of course, it fits with the characters and creates the whole story so it's not really a complaint…just a comment.

Since You've Been Gone is a brilliant story about friendship and finding yourself, about defining who you are and digging into what you once were with the people you knew and want to always know. Written with warmth, love, subtlety, and fun, it's a book that climbs quickly to one of my favourites of the year. And you should read it and discover why, too.


5 stars
and lists upon lists more

Email ThisBlogThis!Share to TwitterShare to FacebookShare to Pinterest
Labels: 5 stars, A BILLION STARS IF I COULD, ARC, friendship, love, Morgan Matson, review, Simon and Schuster, YA