Review: The Museum of Intangible Things by Wendy Wunder (ARC) 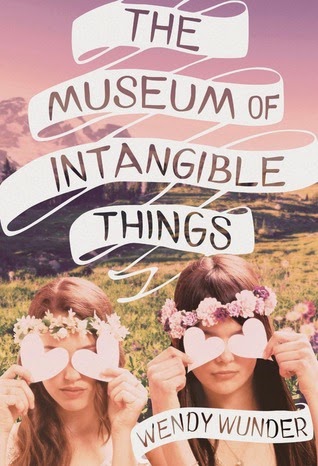 The Museum of Intangible Things by Wendy Wunder
Razorbill (an imprint of Penguin), 304 pages
US Release Date: April 10, 2014
Format/Source: ARC from author - thank you Wendy!!

Hannah and Zoe haven’t had much in their lives, but they’ve always had each other. So when Zoe tells Hannah she needs to get out of their down-and-out New Jersey town, they pile into Hannah’s beat-up old Le Mans and head west, putting everything—their deadbeat parents, their disappointing love lives, their inevitable enrollment at community college—behind them.

As they chase storms and make new friends, Zoe tells Hannah she wants more for her. She wants her to live bigger, dream grander, aim higher. And so Zoe begins teaching Hannah all about life’s intangible things, concepts sadly missing from her existence—things like audacity, insouciance, karma, and even happiness.

An unforgettable read from the acclaimed author of The Probability of Miracles, The Museum of Intangible Things sparkles with the humor and heartbreak of true friendship and first love.
------------------------------Goodreads Summary

Notable Quote
“Perfect should never be a goal. Perfect just happens if you let it…Perfect happens only if you get out of its way."

So I can’t really give away what my favourite part of The Museum of Intangible Things is since it’s a little spoiler-y, but let me just say…there are small details that really got to me here. In the writing, in the design (physically in the book and in the words), in the concept, in the presentation of this story. I feel like there were little glimmers amongst everything, and it was lovely.

Things I can talk about: the concept of this book is so stunning. The idea of living the intangible words, even the echo of it with Zoe and her brother Noah who has to be taught feelings (one of his lines got me so hard: “I cannot tell you how I am.”)…there’s something so subtle and powerful in those ideas. Each chapter focuses on certain intangibles, and I found myself really digging into my life and my own thoughts when each one came up. It was an astounding read to take me into my own head and life at the same time I wanted to be in Zoe and Hannah’s.

The actual plot of this story is pretty interesting, sort of outside the norm of a road trip…it’s not really searching for something, but chasing, and you definitely got that feeling throughout everything. The tone, the pacing, everything kind of gets more frenetic as it goes on, and it sweeps the reader into it all.  For some reason, it made me think of Nobody But Us by Kristen Halbrook…nothing is quite similar, but it’s the same feeling as I read it.

I liked the friendship between Zoe and Hannah, though I definitely felt it was a bit uneven. It’s built into their personalities for Hannah to give consistently while Zoe takes constantly, but I wasn’t too much a fan of that. Felt a little strange, both as characters and as a reader. And while I’ve never seen the movie Thelma and Louise, I have seen the uh…important part(s)…and for some reason that just kept popping into my head. Especially towards the end, as Zoe becomes increasingly unstable and erratic.

Even though there are parts of this book that really got to me, I was still left a bit underwhelmed. It’s similar to how I felt with her debut novel, The Probability of Miracles—things feel a little forced, a little unnatural and a little too convenient. Part of the reason may have been Danny, because I wasn’t quite a fan of him in general and especially not as he became more and more involved into the story. He came across as pompous to me, even when he was being sweet or nice, and I didn’t like it.

However, the concept of The Museum of Intangible Things and the details of its execution within the novel really did save this. I was so blown away by the usage of intangibles and feelings that I am definitely willing to overlook some of the lackluster parts. If nothing else, read this for the reflection it will cause.