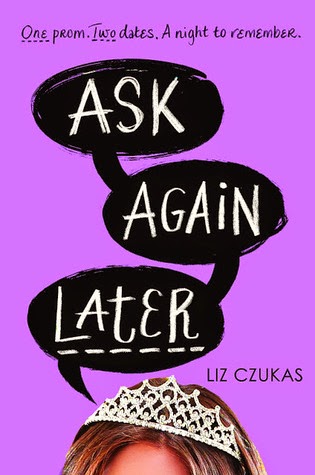 Despite what her name might suggest, Heart has zero interest in complicated romance. So when her brilliant plan to go to prom with a group of friends is disrupted by two surprise invites, Heart knows there's only one drama-free solution: flip a coin.

Heads: The jock. He might spend all night staring at his ex or throw up in the limo, but how bad can her brother's best friend really be?

Tails: The theater geek...with a secret. What could be better than a guy who shares all Heart's interests--even if he wants to share all his feelings?

Notable Quote
Fate is only a comfort if you actually believe in it.

There are few things in the world I love more than a solid contemporary YA novel, and Ask Again Later definitely fulfilled everything I wanted. I knew I’d love it from the premise alone, and then it just turned into something better than expected.

The Heads/Tails split of parallel narratives was so much fun, and I love that it read like a dual narrative (we all know I love me some of those!). It was such a fun way to flip back and forth.

The characters were definitely the best part. They’re all so much fun and funny and I loved the chemistry between every single character. They felt like natural people, like they were really any of the people I knew in high school and I just happened to be reading about them. Even Heart and her brother Phil were interesting and a pretty great representation of a sibling relationship. They kind of reminded me of my brother and I together (though I suspect he and I are close than Phil and Heart are). It was a refreshing mix to see sibling involved in each other’s lives, and that there were different type of relationships throughout the book.

Both Ryan and Troy were such great prom dates! I was completely on Heart’s side when she couldn’t decide who to say yes to, but that she knew she would say yes to both; how could you not with the stories of them both?! It was creative and funny and real and a great premise to Prom.

The No Prom-A Drama crew were probably my favourite parts to this entire story. I not only wish they were all my friends, but it definitely reminded me of my own prom experience. I made a point to go with all friends and made sure to go with a guy who was only a friend—we made it clearly established that he and I were going only as friends, to have a good time and not have the stress or obligation of friends-to-more and weird date-like jitters. And this Prom-A Crew? Totally something I would have been down for. They were all so much fun and personable and loud, and I liked that they were all still friends with Heart and supported her in both scenarios.

I have to say that some of this is predictable in that the more you read, you can figure out who is going to become important and what will happen and that Heart will finally learn to listen to her heart (see what I did there!?)…but it’s so much fun getting there that I didn’t even care I’d guessed it from 15 pages in.

Possibly related to that: I love Schroeder. The nickname and everything.

I was also so in love with all the crazy situations Heart found herself in, how many things spilled on her or went wrong or she got hurt…this entire book was filled with hilariously awesome faux pas and predicaments, and it was seriously so much fun. There was never a moment (or page) I wasn’t laughing or hoping or enjoying the scenario.

Ask Again Later really is contemporary bliss, filled with fun moments and fantastically interesting characters. There’s heart and emotion and love, and you really get to know these characters and love them. If Ask Again Later asked me to the prom, I’d definitely say yes because it was such a good time.