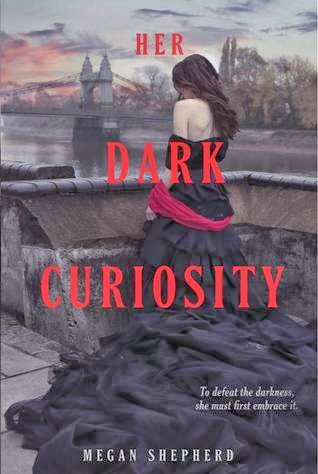 Her Dark Curiosity (The Madman's Daughter #2) by Megan Shepherd
Balzar + Bray (an imprint of Harper Teen), 420 Pages
US Release Date: January 28, 2014
Format/Source: Print ARC via Around the World Tours - thank you!

To defeat the darkness, she must first embrace it.

Months have passed since Juliet Moreau returned to civilization after escaping her father's island—and the secrets she left behind. Now, back in London once more, she is rebuilding the life she once knew and trying to forget Dr. Moreau’s horrific legacy—though someone, or something, hasn’t forgotten her.

As people close to Juliet fall victim one by one to a murderer who leaves a macabre calling card of three clawlike slashes, Juliet fears one of her father’s creations may have also escaped the island. She is determined to find the killer before Scotland Yard does, though it means awakening sides of herself she had thought long banished, and facing loves from her past she never expected to see again.

As Juliet strives to stop a killer while searching for a serum to cure her own worsening illness, she finds herself once more in the midst of a world of scandal and danger. Her heart torn in two, past bubbling to the surface, life threatened by an obsessive killer—Juliet will be lucky to escape alive.

With inspiration from Robert Louis Stevenson’s The Strange Case of Dr. Jekyll and Mr. Hyde, this is a tantalizing mystery about the hidden natures of those we love and how far we’ll go to save them from themselves.
-----------------------Goodreads summary

Notable Quote
"No serum can change who you are. Nor should you change. Genius or madness--it all depends on who's telling the story."

To quickly get this out of the way: I LOVE YOU MONTGOMERY. I FORGIVE YOU.

I love this series so much, you guys. The Madman’s Daughter was a surprise favourite for me last year, and it’s looking like Her Dark Curiosity will be the same. There seemed to be a bit of Book Two Syndrome in that it’s a means to get to the end, a bit of filler to get to the real conclusion, but it’s so, SO good that I don’t even care. I loved that it took from Dr. Jekyll and Mr. Hyde—one of my favourite creepy classics.  I kind of wished there were more from that, but still…it’s good.
In general, I’m still not into Horror…except for when it comes to this series. Megan Shepherd does this so well, so gritty and gruesome and riveting, I can’t look away. I mean, she talks about carnage and actually means it! Blood literally pools and spills and spreads—and it means something. It’s a function in the novel, it adds to the story and doesn’t just make it blood for the shock factor.

Some reviews talk about gagging regarding the love triange, and ok-I get that. I wasn’t too fond of it either…but it makes sense. It shouldn’t be a surprise, and it makes total sense, especially carrying over from Book 1. I think my main annoyance was driven by how much I love and adore Montgomery; how could anyone even think about going for anyone other than him?! Impossible.

The family/father figures in this novel were fantastic. I love that even though Juliet’s father…well, we know what happened to him at the end of Book 1, but I love that he’s still quite an influence on her life. Every decision, every thought, everything about her and the others tied to his work are irrevocably twined together, and I love that. I quite liked the Professer and his sister as well; they were great additions, adding a lot of heart and love amongst a dark, dreary story.

Lucy, Juliet’s best friend, was my dark horse of this novel. I didn’t expect to love her so much. She’s such a great character, as a writer and a reader. She’s full of life and personality, and she pops off the page; and her interaction with every other character is so amazing and awesome. She is herself to a fault, and she’s great with Juliet. And I like that she’s turned into more than just the friend. I can’t give away what happens, but her role has increased, and I heavily support it and love it.

I want to talk so much about the last half of the book, but obviously can’t—just trust me that Book Three sounds like it will be even more amazing and mind-blowing than the first two. And considering how much I love them, that’s saying quite a lot. I so look forward to more of this world, to more of this story, to more of everyone and everything. Megan Shepherd really created a world filled with horrors and tender moments that I can’t look away from it. Even when it’s murders and attacks and more murders.

Her Dark Curiosity is a fantastic addition to the The Madman's Daughter series; it just keeps getting better and better. If you haven’t started this yet, you’re definitely missing out.
5 stars