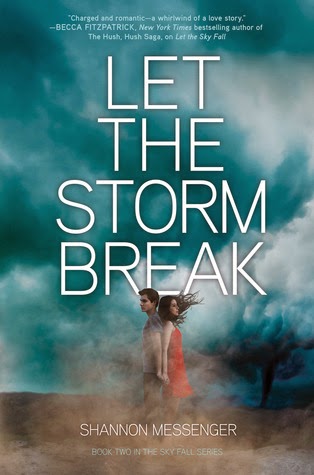 Vane Weston is haunted. By the searing pull of his bond to Audra. By the lies he’s told to cover for her disappearance. By the treacherous winds that slip into his mind, trying to trap him in his worst nightmares. And as his enemies grow stronger, Vane doesn’t know how much longer he can last on his own.

But Audra’s still running. From her past. From the Gales. Even from Vane, who she doesn’t believe she deserves. And the farther she flees, the more danger she finds. She possesses the secret power her enemy craves, and protecting it might be more than she can handle—especially when she discovers Raiden’s newest weapon.

With the Gale Force weakened by recent attacks, and the power of four collapsing, Vane and Audra are forced to make a choice: keep trusting the failing winds, or turn to the people who’ve betrayed them before. But even if they survive the storms sent to destroy them, will they have anything left to hold on to?
-------------------------------Goodreads Summary

Notable Quote
"…I would rather die with the rest of the good than live on in the emptiness without it."

As I always write when reviewing some of these author’s works, I have an obligatory “disclaimer” type: I know Shannon Messenger in real life – I’ve gone to almost every one of her San Diego events, we share a set of friends, we’ve vaguely hung out after events. And I don’t mean this as an “I’m so awesome I know her I’m famous”, I mean it that I know Shannon’s tone and I’ve heard her read from her books. Whenever I read any of her novels, I hear it in her voice in my head.

That all said, I think this book would have been amazing and fun even if I didn’t know her. I’m always afraid that second books in series will just be kind of a boring bridge (I call it Book Two Syndrome), but this one was shockingly not at all! I felt like Let the Storm Break brought a lot more to the story line, and had a nice mix of teenage angst and action along with it. Let the Sky Fall definitely felt a little more of a romance to me, with the windwalking as a bit of a device—but Let the Storm Break really brought the story into itself.

I will have to say I don’t think the characters developed much more though. They’re pretty solid from book one, and they never waver much—which is fantastic since I like Audra and Vane as is. But they don’t surprise me much in this book, and they definitely follow the path we all think they will go on. One one hand, it would have been nice to get one or two more layers to these characters, but I enjoy them as they are, too.

The secondary characters that come in though more than made up for the missing development in the main ones. I adore Gus and everything he brought into the story. I liked Fang/Feng, even though…well. You know. Even the development of Audra’s mom and Raiden was pretty decent, though terrifying as well. There’s some seriously dark stuff in this book, man—some of the tortures and punishments could probably give me nightmares, if I thought about them too long.

Not to say this book is scary, not at all. Shannon does so well pulling humor into it, mixing with the negativity and humanity to make it this really fantastic mix. Vane’s signature sarcasm and teenage boyhood are there in full force, and it’s so much fun. I even liked him around Solana—whose story was sad and beautiful all at once. I feel for her, I really do.

Let the Storm Break is a great second book to the series—it brings in so much plot and action that I felt like it was just more and more intense as the pages went by. I’m eager to see where this goes, where the wind will take them and what it will say them. And with any luck, there will be plenty more Westerly-made haboobs.