Review: 16 Things I Thought Were True by Janet Gurtler (eARC) 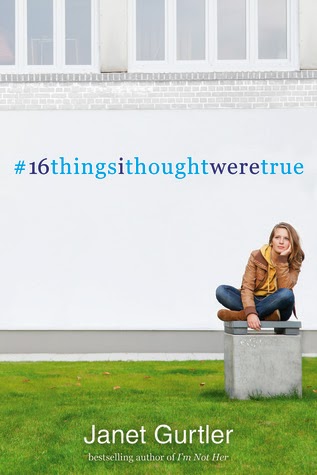 When Morgan's mom gets sick, it's hard not to panic. Without her mother, she would have no one—until she finds out the dad who walked out on her as a baby isn't as far away as she thought...

Now that they have a summer job together, Morgan's getting to know the real Adam, and he's actually pretty sweet...in a nerdy-hot kind of way. He even offers to go with her to find her dad. Road trip, anyone?

5000 Twitter followers are all the friends I need #thingsIthoughtweretrue

With Adam in the back seat, a hyper chatterbox named Amy behind the wheel, and plenty of Cheetos to fuel their trip, Morgan feels ready for anything. She's not expecting a flat tire, a missed ferry, a fake girlfriend...and that these two people she barely knew before the summer started will become the people she can't imagine living without.
-------------------------Goodreads Summary

Notable Quote
But remember, if the world didn't suck, we'd all fall off it.

I’ve only read one other Janet Gurtler book (review of How I Lost You here!), but I knew even then that she was a force in YA lit. She can tackle so many things, so many emotions with a bravely and raw real approach…reading her books always makes my heart constrict somehow. And 16 Things I Thought Were True was no exception.

First and foremost, I freakin’ love Amy. She comes barging into the book at nonstop and it just takes off from there. She is the perfect supporting character, the perfect new friend, the perfect secondary character that adds and takes away and enhances all the points you want. She has her own personality (does she ever!), and even though she really is loud and candid, she never overtakes Morgan.

I was kind of surprised how much I liked 16 Things I Thought Were True  I don’t really have any first hand knowledge of most of what happens in this book (thank goodness!), but there’s a great amount of emotion that you can relate to. I don’t know what it’s like to have a mother with a heart problem, but I know what it’s like to be scared for her health. While I am thankfully an outsider to the problems, I can feel it all pretty well.

At the same time, what happens…ok. I get it. I don’t want it to have not happened, but I felt like it was a lot to throw into a book so late in the game. There are so many problems and elements of YA novels tossed into this one, I felt a little bit rushed and crammed. Dying mom, absent mom, work drama, viral video, road trip, new love, cancer, lies, tweets, follower goals, ex-best friends…if you can think it, it’s probably somewhere in here. And there were definite moments where the plot was moving fast—almost too fast. Like, 3 sentences would span an entire gammet of emotions. Sometimes I just needed a moment to absorb what was happening.

However, I freakin’ loved so much of all that happens that I was kind of willing to look past it. The road trip was so much fun, and even though quick, it was a fantastically funny and real way to get to know Adam and Amy along with Morgan. I liked the twist with the father and that entire struggle—it was different and not what I expected.

And of course, I have to talk about Adam…I’m not too crazy about him, but he did seem to be pretty real. He wasn’t an immediate Prince Charming, he was kind of a dick for a lot of his parts…but that was kind of appealing. He meshed well with Morgan and the overall tone of the book (I swear I did not mean to call this entire book a dick haha)—it was a good complement to the vibe of the novel, is all. He’s normal, and that in itself is pretty refreshing.

16 Things I Thought Were True tackles a ton of issues (sometimes too many), but so much of it was fun and interesting that I sped through the novel and fell in love a hundred times. I wish to all the bits I have I could be friends with Amy in real life—and while I think the rest of the novel deserves to be read, she is the real reason I will push someone to read this book.


PS. Make sure to check out my blog tour post that features 2 things Janet Gurtler thought were true!
4 Stars

Posted by Ashley @ Ashley Loves Books at 1:35 AM