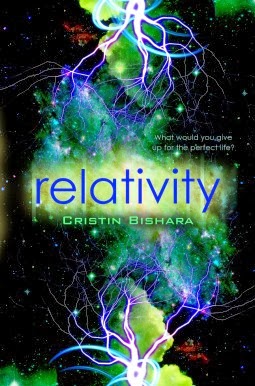 Relativity by Cristin Bishara
Walker Childrens (an imprint of Bloomsbury), 288 pages
US Release Date: September 10, 2013
Format/Source: ARC via Around the World Tours - thank you!

If Ruby Wright could have her way, her dad would never have met and married her stepmother Willow, her best friend George would be more than a friend, and her mom would still be alive. Ruby knows wishes can't come true; some things just can't be undone. Then she discovers a tree in the middle of an Ohio cornfield with a wormhole to nine alternative realities.

Suddenly, Ruby can access completely different realities, each containing variations of her life—if things had gone differently at key moments. The windshield wiper missing her mother’s throat…her big brother surviving his ill-fated birth…her father never having met Willow. Her ideal world—one with everything and everyone she wants most—could be within reach. But is there such a thing as a perfect world? What is Ruby willing to give up to find out?
---------------------------Goodreads summary

Notable Quote
It seems like a footnote, no big deal--it's just Dad's job--but there's the inevitable ripple effect, the butterfly effect: the seemingly insignificant flapping of a butterfly's wings can effect an atmospheric change, which can alter the path of a tornado. Little alterations, big repercussions.

There’s been a definite trend in parallel universes in YA books, guys. I know it’s been around for awhile, but between The Theory of Everything, Parallel, and Relativity, it’s definitely gaining some ground. And I have to say, I am loving it!

Something I loved about Relativity is the different approach it takes to parallel universes and string theory. It’s not drastically different universes filled with pandas or fantasies, or completely different futures and trajectories – it explores how a fork in the road can alter things but still have some things remain the same. As a big believer in fate, destinies, and meant to bes (except not soulmates), I like how Relativity incorporated the concept of things that would stay the same no matter what choices are made. That some things are meant to happen, no matter where you are or in what dimension.

This was a really great story, guys. Ruby is a fantastic main character, filled with a lot of little things everyone will recognize. The element of her mom being alive in some dimensions and not in the other was really sad and made me cling and get quite invested. Seeing Ruby in all these different situations that were completely familiar was also really fun and gave a great dimension (no pun intended!) to her character. You really get to see a broad range of reactions and personality to her, and I liked that a lot.

The secondary characters were a great mix, though I admit a few of them fell just a little for me. I really loved Sally, Ruby’s mom- she was the perfect mom while remaining her own person. I thought Kandy was a straight up psychotic bitch (in most dimensions), but that was the interesting part to her. I wanted a little more to her story, but what was given was pretty satisfactory. Willow, the step-mom, was kind of the same; she was a bit flat, but what she did lend I really liked. And of course George, who for a character that’s actually not too present in a lot of the book (or dimensions) was REALLY fantastic. I loved him and Ruby and how open he was to all the craziness Ruby threw at him. I wish there was more of him.

Oddly, I really loved the science and how it was worked into this book. I am loving that YA books are getting more into explanation, into giving you the actual research behind certain situations rather than trying to dumb it down or insinuate- and Relativity did it quite well. It was integrated into each character’s personality so smoothly, I barely realized I’m reading about the science of wormholes and string theory.

Relativity was a fun, fascinating read that really made me think about the things in my life that would be there no matter which world I’m in. The ending did leave me slightly unfulfilled somehow (not to be mistaken by incomplete!), but overall I’m really happy to have read this and added it to the growing pile of Parallel Universe YA. If you’re into this style – or even if you’re not—you should definitely give it a try.