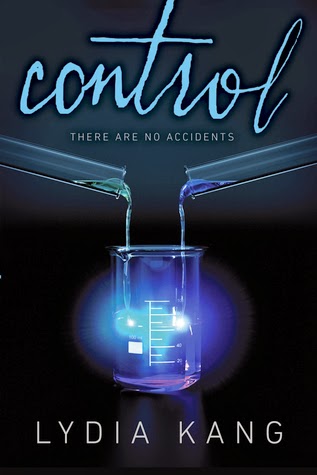 Control (Control #1) by Lydia Kang
Dial Books (an imprint of Penguin), 400 Pages
US Release Date: December 26, 2013
Format/Source: ARC via Around the World Tours - thank you!

When a crash kills their father and leaves them orphaned, Zel knows she needs to protect her sister, Dyl. But before Zel has a plan, Dyl is taken by strangers using bizarre sensory weapons, and Zel finds herself in a safe house for teens who aren’t like any she’s ever seen before—teens who shouldn't even exist. Using broken-down technology, her new friends’ peculiar gifts, and her own grit, Zel must find a way to get her sister back from the kidnappers who think a powerful secret is encoded in Dyl’s DNA.

A spiraling, intense, romantic story set in 2150—in a world of automatic cars, nightclubs with auditory ecstasy drugs, and guys with four arms—this is about the human genetic “mistakes” that society wants to forget, and the way that outcasts can turn out to be heroes.
-----------------------Goodreads summary

Notable Quote
Failure is always a real possibility. But nothing would be accomplished if we always succumbed to fear.

Control was a weird read for me. It’s not my usual cup of tea (can’t say biomedical YA is normal in general!), and I felt like this book was trying SO hard. Too hard. And despite all that, it was still every bit as typical as ever. Every personality you could want is here, all types of rivalry and friendship and brotherhood and sibling love and relationships and real love, and none of it in a really special way. The book was predictable in the weirdest ways; even the “twist” of the “trait”, the good house versus evil house, the nightclub.

It was definitely a slow start for me. I just wanted it to hurry up, and I may have even skimmed through a page or two or nine. What probably didn’t help is that I felt like I recognized a thousand different books in the pages. Which also makes me feel like Control wasn’t entirely original. A lot of it was fun, and I’m not saying I’ve ever read a singular book like this—except it seemed to be built off a lot of good parts of other books, and it was a bit weird. I didn’t like that almost every scene I could say, “Hey, that’s like X-book!”

Still, I read it. All of it. Control definitely picked up in the latter half and I finally started to feel like I was getting invested. The characters, though typical and pretty predictable, are endearing in their own little ways. I enjoyed seeing how their “traits” affected them and made them quirky. I enjoyed them all in the house, especially when they were all in a group. Is it weird to say they have chemistry together? Because they do.

Perhaps the only thing I didn’t predict was the end between Zel and…well. You know. But it’s my own naivete. If I’d bothered to take a step back and see the story as a whole rather than pieces of others, I would have seen it and known it was meant to be this way at the end of Book One.

Control was a mixed bag for me. I liked it only because I found it to be parts of books I do like, and the better parts…which is also its downfall. But I will definitely read the second book to know where it’s going to and what happens with the entire crew, so at least there’s that.