Review: Anything To Have You by Paige Harbison (ARC) 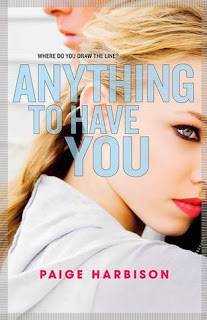 Anything To Have You by Paige Harbison
Harlequin Teen, 304 Pages
Expected US Release Date: January 28, 2014
Format/Source: ARC via Around the World Tours - thank you!
Challenges: Contemporary Challenge, Stand Alone Challenge

Nothing should come between best friends, not even boys. ESPECIALLY not boys.

Natalie and Brooke have had each other's backs forever. Natalie is the quiet one, college bound and happy to stay home and watch old movies. Brooke is the movie—the life of every party, the girl everyone wants to be.


Love is the one thing that no matter how much you want it, if it's not there, there is nothing you can do to get it. No measure of hard work, begging, crying, wanting or needing; nothing in the world can make love happen out of nothing.

I was debating if I should sign up for this touring ARC when I first saw it posted because Harlequin Teen can be a bit hit or miss for me. I expect a lot of things from Harlequin in terms of love stories and romance, you know? And this sounded good, but I also felt like I probably knew the story without even reading it. But I went for it, because why not? It sounded daring and passionate, two things I hardly turn down.

And honestly? I’m pretty disappointed. The entire novel was predictable, down to the “twist” and other turns they threw at the reader. Perhaps the only thing that really took me by surprise was that this book turned into a dual narrative (didn’t expect to get Brooke’s point of view!), but that actually was a bad thing for me. I don’t think it added anything to the storyline, I didn’t think it was executed well…it was basically two books shoved into one that happened to criss-cross. Sure, the storyline overlapped since it was written to, but I didn’t think knowing the other side enhanced the story more.


And I admit that while a lot of the boys were pretty hot on the page (at least I can still count on Harlequin for that!), there were so many flaws in each one that I couldn’t believe it. Aiden was nice and sweet (aside from possibly sleeping with his girlfriend’s best friend…but y’know.), but he was just a little too perfect. His reactions, all the things he did to protect others and be considering of them…it was too much. Too perfect, too ideal, especially in comparison to the other males in the book. I could not STAND Eric – he was supposed to be Mr. Hot Stuff at school, the untouchable but all-wanting, the perfect dude, but I actually thought he was a preeeetty big douchebag! Some of the things he said or did were pretty clear asshole things to me, and I couldn’t understand why every girl at the school seemed to love him.

Other things that bothered me: 1) every character was described as hot or popular or pretty or model-like. This is not a TV show, not every single damn character is going to be flawless and hot. It diminished any of the relatability I could get to any of the situations. And 2) the title does NOT fit with the novel to me. I don’t think someone did anything to have someone, I did not think it was as daring as it could be or really pushed any boundaries. The title makes it sound a lot more…risqué, you know? And it wasn’t at all.

Perhaps the only thing that did push the envelope was Brooke and her spiral towards the end. I normally am not into those Badass Girl characters, but she was the only one I could vaguely see the progression with and understand how she went there. Her attraction with Reed, the reactions to Aidan and Natalie, everything made sense to have her go in the direction she did.

I did like Natalie and Brooke’s friendship, too. That worked nicely together, I believed in it and their connection and all the emotions they experienced together and because of the other. That was probably one of the only redeeming parts to this entire novel.

Obviously, Anything To Have You wasn’t quite the book for me. It had so much potential and could have been, but I thought very little of it worked. While I endorse the friendship between the girls, I can’t endorse much else.