Guys, I'm so SO excited to have this on my blog today. I had the pleasure of going to an event with Dan Krokos last year, and he was so awesome I'm pretty certain I fell just a little in love. He's got a great wit and was so genuine and fun -- so when I was asked to interview him, I couldn't believe the good luck! I quite like him, and the False Memory series is a fantastic, thrilling read. It's completely unique from anything I've read, and I can't wait for the third and final book. Speaking of that third and final book...GUESS WHO'S GOT THE TITLE FOR IT?! A reveal, guys! Read on below for it... 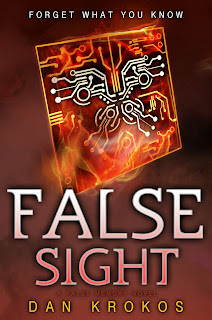 All Miranda wants is a normal life. She's determined to move past the horrible truth of her origin as a clone so she can enjoy time with her boyfriend, Peter, and the rest of her friends at school. But Miranda quickly learns that there's no such thing as normal - not for a girl who was raised to be a weapon. When one of her teammates turns rogue, it begins a war that puts the world in jeopardy. Now Miranda must follow her instincts - not her heart - in order to save everything she's fought so hard to keep. with the image of a terrible future seared into her mind, what will she have to sacrifice to protect the people she loves?
---------------------Synopsis provided by publicist

1. What’s it like writing in a female character’s voice? What made you go that route?
It was very difficult at the start, before I really knew Miranda. I don’t think I’ll do it again for a long time, at least not in first person. I went that route because at the time I’d been writing a lot of masculine adult crime fiction, lots of action and grit and all that. And I was getting rejections from publishers saying, “This is good, but it won’t appeal to enough female readers.”

I wasn’t sure what that meant, since I know a lot of women read and love gritty crime fiction, but it started to make me think. What if this was all I could do? Did I really want to write the same kind of book the rest of my life?

So I decided to really step outside my comfort zone. Adult thrillers were comfy. But writing for the perspective of a teen girl? Decidedly uncomfortable. Luckily I had lots of great female readers to help along the way.

2. So much of this story seems to involve science, from the ability of the Roses to their existence. Have you always been a science nerd?
Always. Ever since my dad got me into SF as a kid. I think the advancements we’ve made are too incredible for words, and then I think about how much we still don’t know. It’s amazing. I try to base as much stuff as I can in reality, to make it feel grounded, but I definitely toe the line into fantasy sometimes. I’m a huge fantasy nerd too, so I just can’t help it.

3. What are some of the challenges you face writing a sequel/continuing series?
Continuity. Making sure stuff makes sense from beginning to end. It really sucks to have a cool idea for book 3, but then not have access to book 2 to make the necessary changes. I think it would be cool to write a series and have all the books done before they come out.

Another big challenge is upping the stakes in each book. If you have the world at risk in one book, what do you do for the next? Put it at risk again? That would get boring, fast, and it wouldn’t be all that tense.

4. Do you feel your writing changed between books?
Absolutely. I think False Sight has much better prose overall. I was a new baby author writing False Memory in 2010, and I’ve definitely grown since then. I also got more comfortable with Miranda’s voice, so it was nice to be able to slip back into that.

5. What did you learn from Book 1 that influenced how you wrote and/or approached book 2?
Apparently nothing. I wrote a draft of book 2, and then threw it out completely and started from scratch. It took a lot longer overall to finish the second book. Goes to show you that, even with an outline, things can go wrong. But the hard work was worth it, I think.

6. I know it’s futile, but it can’t hurt to ask: anything you can tell us about Book 3? The title? The first word of the book? Anything?!
Sure! The first sentence will probably be, “True Earth came back to finish us off on December 21st.” It’s Rhys talking, though he isn’t a viewpoint character, at least not after page 2.

Almost the entire book takes place in Manhattan during a snowstorm. The kind where it’s so cold it actually hurts to go outside. I wanted to keep it to one location after the mania in book 2.

And I don’t think I’ve revealed this anywhere, but the title is FALSE FUTURE.

7. Are you nervous about ending your series? What are your feelings about the end being near?
I’m really excited about it, about there being a conclusion. I have two series right now, and the worst part about them is that they’re not done. They’re not complete. So to finish something will be really cool. I’m nervous about it for sure (I’m actually working on the final edits right this minute), but I think it ends in a satisfying place. That’s all I want: for people who’ve been around the last two years to feel like it was worth the read.

8. I was at an event with you last year, and the girls in line were fighting about which boy they claimed. So I have to ask: are you Team Noah or Team Peter?
Team Peter, absolutely. He’s the guy I want to be. Noah is closer to the guy I am, or was. Actually, I’m Team Rhys. I like him a lot, and no one seems to want to kiss him.  [Ashley's note: I'm Team Rhys, actually!]

That’s nice that people still like Noah. After everything he’s done, I’m surprised anyone can forgive him.

Flash Answer Section
Music or Quiet? Music.
Series or stand-alones? Series.
Pen or pencil? Pen.
Outer space or underground? Outer space.
Lose your sense of smell, or lose your sight? Smell.
Weapon of choice? Straight sword.
Scientists develop a pill that will enhance ONE of your five senses for 24 hours – but you can only ever do it once. Do you do it? And if you do, which sense do you choose and when? Sure, why not? I’d probably go with sight. Everything else might be awful. If you could hear that much better, you’d probably get a headache. And I live in NYC, so I already wish my sense of smell was dulled.

As I always end…
Last 3 items purchase?
A windproof ninja mask to wear in winter. Clear protective glasses for riding a motorcycle at night. And new computer speakers.

Last 3 books read?
The Stand, The Blade Itself by Joe Abercrombie, and Heart Shaped Box by Joe Hill. 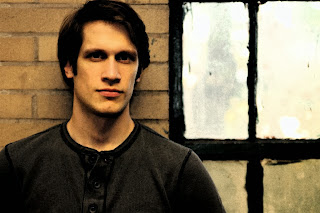 About the Author
After pumping gas for nine years to put himself through college, Dan Krokos, now twenty-seven, dropped out to write full-time. He is currently hard at work on three separate projects: the final stop for Miranda North in the False Memory series, the next adventure for thirteen-year-old Mason Stark in The Planet Thieves series, and his first adult thriller.

How PERFECT is that title for the third book?! I'm dying for False Future! Thank you so much Dan for being a great interview and letting me host you! (And thank you Anne!)
Posted by Ashley @ Ashley Loves Books at 12:00 AM