Top Ten Tuesday is hosted by the fab ladies at The Broke and the Bookish! 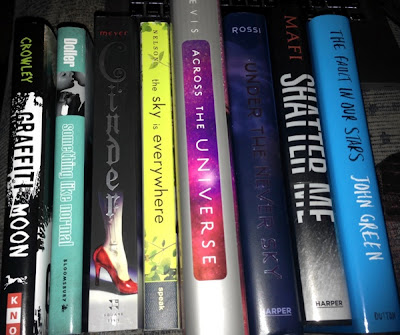 The Obvious
1. Isaac from The Fault In Our Stars by John Green
He made me bawl and love just as hard as Hazel and August. That eulogy...

2. Kenji from the Shatter Me series by Tahereh Mafi
Oh, you know why.

3. Roar from the Under the Never Sky series by Veronica Rossi
Again, you know.

4. Harley from Across the Universe by Beth Revis
MY HEART.

5. Joe Fontaine from The Sky is Everywhere by Jandy Nelson
He toes the line of secondary/main love interest, but I wanted to include him. Because, saxaphone and wine.

The Best Friend We Want
6. Finny from The Theory of Everything by Kari Luna
Major, MAJOR Finny love from me.

7. Grover from the Percy Jackson series by Rick Riordan
Funny and true.

8. Will from From What I Remember by Stacy Kramer and Valerie Thomas
Independent and real, he's a fantastic friend.

9. Iko from Cinder by Marissa Meyer
Who doesn't want an Iko?!

There's No Other Way to Explain It
10. Every secondary character in Something Like Normal by Trish Doller
Because they all break my heart and make me believe in friendship, support and challenge all at once. Even the ones I wanted to punch.

Honorable Mention
Best Use of Secondary Characters To Enhance A Plot
Leo/Poet from Graffiti Moon by Cath Crowley
because his poetry makes it all the better.

Which secondary characters were most memorable to you?
Leave your link and I'll hop by!
Posted by Ashley @ Ashley Loves Books at 12:52 AM